Liz Tells Frank What Happened In “The Cabin in the Woods” 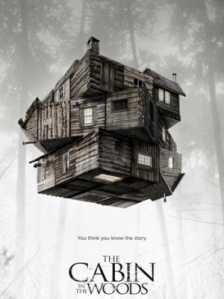 I feel kind of guilty about writing this, so let me just be upfront: You should see Drew Goddard and Joss Whedon’s The Cabin in the Woods. You should read this post only after seeing The Cabin in the Woods, because it’s a smart inventive film with some great twists and surprises. You and everyone else should go to a movie theater and vote with their ticket dollars for smart, original films that play with genre. I’ll see you in two hours plus however long it takes you to walk/drive/bike/bus to your local movie theater. Have fun!

Great! I hope you liked the movie, Frank! Let me tell you about what you saw:

Five young college students load into an RV and drive out to a creepy cabin in the woods. Once there, they party hard, but just as things are getting sexual they are each brutally killed by a variety of horrible creatures and accidents. THE END.

All right, some other stuff happens too… You see, Frank, The Cabin in the Woods is a horror film with some very solid scares in it, but it’s also an academic analysis of the horror genre in movie form. It examines the primal impulse that unites Friday the 13th and Grimm’s fairy tales. It’s also really fucking funny — mostly because of the meta.

See, Frank, my above description of the plot is 100 percent accurate. But what I left out is the windowless office building where the dad from Six Feet Under, Fred from Angel and JOSH MOTHERFUCKING LYMAN are part of a massive organization working to make sure that our five hapless youths meet an unpleasant end.

Wherefore, Josh Lyman (I think I’m using that correctly)? I’ll get to that in a sec. The important thing to know for the moment is that from the very beginning of the movie, the kids are being tracked by mysterious men with earpieces. Their bodies are drugged to manipulate them into behaving like stereotypes. And bets are being taken on how, exactly, they will meet an unpleasant end.

Because, Frank, remember how in olden times, people used to sacrifice people (or body parts of people) to appease vengeful gods? The Cabin in the Woods operates on the conceit that horror movies tropes are essentially the modern version of that. Essentially, the men and women of MysteryOrg are working to make sure that a sacrifice to the gods occurs before the gods get un-appeased and decide to destroy the world. Normal stuff, you know?

MysteryOrg is only one of a number of facilities around the world working towards the goal of sacrificing folk for god-appeasement, but as the film starts we learn that those other facilities, for this round of sacrifices, have all failed to kill the requisite amount of people. (This is done with occasional glimpses of monitors tracking the other countries at work — the funniest/creepiest of which, you might guess based on its track record, is Japan.) So essentially THE FATE OF THE WORLD depends on all the yoots dying on cue–

Except whoops, the stoner screws it up! See, the five victims have been chosen to fill specific roles — whore, jock, scholar, fool, and virgin — and, as mentioned, manipulated via pheramones and other drugs into sticking to those stereotypes.

It doesn’t make much sense on paper, until you remember how cookie-cutter the characters in slasher movies are. At the beginning of the film, the characters are complex and interesting: Thor, typecast by MysteryOrg as a jock, is attending college on full academic scholarship, while our virgin is hardly virginial — she’s actually dealing with the end of an extremely inappropriate affair with a professor. But over the course of the film, via the aforementioned drugging of food, weed, and blonde hair dye, each kid is pushed into a role cast for them decades ago. 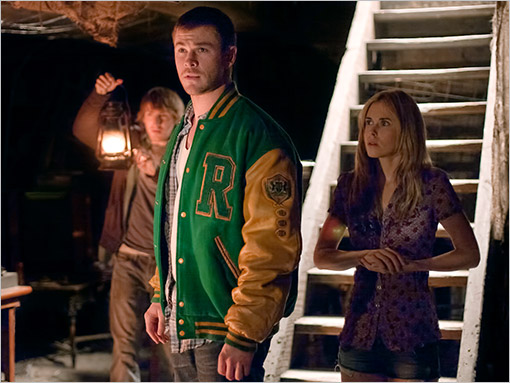 However, the ordinary joes holding the reins at MysteryOrg have grown complacent, and fail to properly treat a stash of weed the “fool”/stoner of the group has brought along. So when the “randomly selected” villains du jour (there’s a whole thing about how the monster of choice has to be technically chosen by the victims as a part of their “transgression”) (if you’re wondering, the randomly selected monsters are zombie pain-worshipping incestual rednecks) fail to properly kill said stoner, he manages to muck up the whole operation.

Specifically, he does so by helping the virgin (AKA “the final girl”) escape into an elevator that leads down to MysteryOrg’s home base. But that elevator is only one of dozens of elevators in the facility, each filled with a horror both unspeakable and extremely recognizable: Hellraiser-esque demon, giant spider, werewolf, unicorn…

And the virgin can’t help herself; as soon as she gets the chance, she presses the great, big, threatening button and releases all the horrors of the human imagination upon the people working for MysteryOrg. (In her defense, they have been trying to kill her and her friends.) The resulting bloodbath? It’s a terrifying, awful, gruesome, hilarious thing. (SERIOUSLY FRANK GO SEE THIS MOVIE.)

And then the virgin nearly shoots the stoner for the sake of the human race! But then a werewolf attacks her! And the stoner, with some help from a zombie pain-worshipping incestual redneck, wins his fistfight with Sigourney. And then the two of them basically decide that the human race is kind of worthless, and that maybe an apocalypse is exactly what we all deserve.

The stoner lights up a doobie, the two of them enjoy some herbal refreshment, and a giant hand reaches out from beneath the surface of the earth and begins fucking up the place. THE END. (If you’re counting, Dollhouse fans, this is the second apocalypse that Fran Kranz is responsible for.)

I’ve taken care, with this recap, not to spoil any of the really good jokes or gags in this movie (of which there are quite a few); I genuinely hope, Frank, that reading this makes you want to see the movie if you’ve ignored my heeding at the beginning. Because here is what is so interesting about Cabin: The end conclusion of this horror movie is that horror movies are kinda gross — or that they represent something gross about humanity.

In short, there is a strain running through us all that craves witnessing the misfortune of others — that demands sacrifice. And full credit to Cabin for making us acknowledge that.