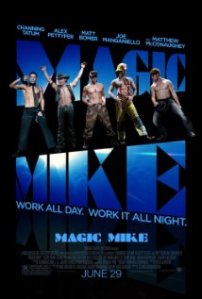 Yesterday morning at work, I was in line to buy some orange juice at the office’s little shop when I overheard the following conversation:

Giggling ensued. I can only imagine that this conversation was had in a thousand office buildings, in a thousand cities, this morning. Giggling included.

Magic Mike, Frank, is about as simple as movies can be: Young guy without a job (known forever as The Kid) gets a job working as a male stripper, thanks to the titular Magic Mike, who doesn’t hate the work but does hope to transition to a more sustainable long-term career.

Parties, money, and drugs ensue, until eventually The Kid gets in over his head thanks to some bad decisions regarding parties, money and drugs; Magic Mike has to bail him out (sacrificing a big chunk of his savings in the process) and decides to give up the life, focusing instead on trying to win the heart of The Kid’s sister, a nice lady with a grown-up job. The sister and Magic Mike kiss. THE END.

That’s what happened in the movie, Frank, with one minor exception:

Yes, there are many explicit scenes of extremely attractive men dancing in thongs for the pleasure of ladies. All of them are extremely believable as male strippers. And the personal trainers of all involved deserve motherfucking Academy Awards.

That said, probably the most surprising aspect of Magic Mike is that while you’d expect this movie to be as crass and shallow as something like Coyote Ugly, that is not the case. It’s a goddamn real movie, made by Steven Soderbergh, who continues to be one of America’s most interesting directors. This means two things: The movie, in its relaxed contemplative European way, is actually pretty interesting — and it’s not as much fun as you might hope.

I mean, don’t get me wrong, the girls sitting behind us Sunday evening had plenty to “Whooooo!” about. (I wish I had seen Magic Mike at a midnight Friday screening — clearly, the way Shakespeare was meant to be seen.) But Soderbergh took this movie seriously, and he kind of forces you to do the same.

This shows up primarily in the treatment of our protagonist Mike, who (according to something I read on the Internet one time) is based on a real guy who mentored Channing Tatum when he was a 19-year-old The Kid. Mike, a self-described stripper-slash-entrepeneur (or, yes, entrepeneur-slash-stripper), is saving for his dreams, being all too aware that taking his clothes off for dollars isn’t a sustainable career path in the long term.

It shouldn’t really matter what Mike wants to do after escaping the stripping lifestyle, except that it totally does because for serious Mike’s dream is to design custom furniture — a detail worked clumsily into the film’s trailer, but more successfully integrated into the actual plot.

Why custom furniture? Who the fuck knows. It’s so random a life goal that it almost loops back around to making total sense. I kind of respect it. And Mike does seem to be really good at putting pieces of glass on top of salvaged metal bits. But I’m no custom furniture appraiser, so what do I know? 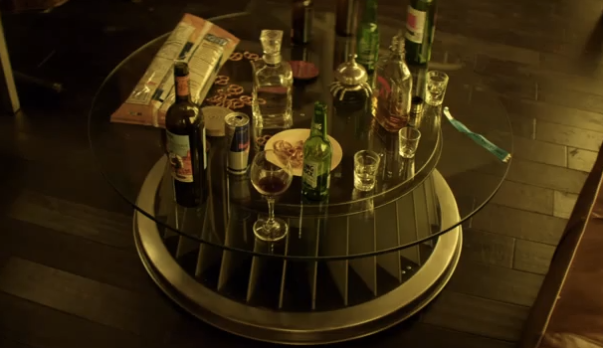 I mean, it’s not an UGLY table…

The reason Mike’s custom furniture dreams do matter, I suppose, is this: Michelle Said at A Bright Wall in a Dark Room wrote something I really liked about this movie, about how one of its key themes is how what you do for a living can often become your identity, for better or for worse.

One key to happiness, after all, is loving what you do. But does that mean you should let it define your existence? Magic Mike says no, that no one is just one thing, really, especially if that one thing is showing your abs to bachelorette parties.

Speaking of abs… Okay, I am going to limit my thoughts on Channing Tatum (and his abs) to this paragraph and this paragraph alone: I AM A CHAN FAN. I don’t think he’s a great actor, and honestly I don’t find him super-attractive. (Except when he wears glasses, as he does during one scene in Magic Mike, but chalk that up entirely to my glasses fetish.) But the more I read about him, the more I’m fascinated by his physicality and goofy charm — plus, he’s the funniest part of the 21 Jump Street remake, which SHOULD NOT BE TRUE BUT IS TOTALLY TRUE. Truth? I love him the way dog people love puppies.

Does this mean that watching Channing rip off his pants on the big screen got my girly parts going? The answer to that, to be honest, is not really. No insult meant to the man’s dance skills and/or physique (both of which are excellent) — it’s simply confirmation of something I’ve felt since the age of 18, when I went to the illustrious Hollywood Male revue show for a friend’s birthday party. I can appreciate a nice physique, but to lose myself in the moment, it needs to be part of a story. 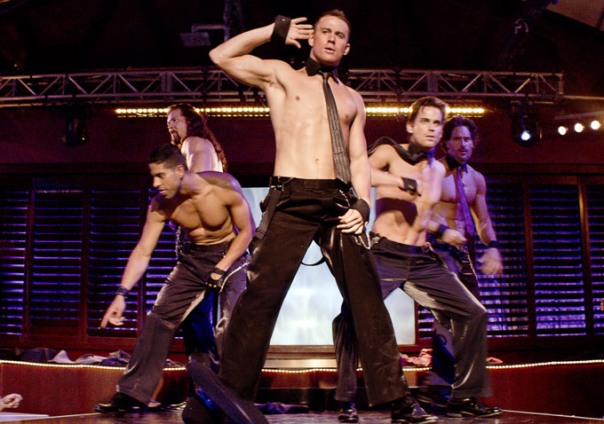 And I feel that many other ladies feel the same — otherwise, romance novels would not be, literally, the most popular books on the planet. I suspect it to be a side effect of social conditioning as opposed to biological gender differences, but my point remains that a few paragraphs of graphic description go much further with most girls than a photo of a naked man.

Liz Shannon Miller is a Los Angeles-based writer and editor, and has been talking about television on the Internet since the very beginnings of the Internet. She recently spent five years as TV Editor at Indiewire, and her work has also been published by the New York Times, Vulture, Variety, the AV Club, the Hollywood Reporter, IGN, The Verge, and Thought Catalog. She is also a produced playwright, a host of podcasts, and a repository of "X-Files" trivia.
View all posts by Liz Shannon Miller »