Meredith Tells Liz What Happened In “The Comeback” 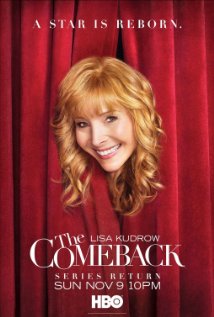 Okay, have you watched The Comeback? Because if you haven’t then you really should. People are saying it’s meta and I’m not sure what that means but it sounds cool and for some reason, it reminds me of the Transformers although I’m not entirely sure why. Anyway, The Comeback is the best and Lisa Kudrow should win all the awards forever and ever and when I say all the awards, I mean all of them. Emmys, Oscars, Tonys, Grammys, golf trophies, bowling trophies. She’s just that good.

Lisa Kudrow plays Valerie Cherish, a washed up actress whose claim to fame was being in show called, I’m It a long, long time ago and her career stalled. The Comeback first aired in 2005, thirteen months after the finale of that other show she did about the six friends who drank a lot of coffee. I don’t know, I didn’t watch it…more than five times in a row. Although, it is kinda, maybe, sorta weird because looking at Lisa Kudrow’s Wikipedia page between the end of that coffee shop friendship show and The Comeback, there isn’t anything really.  So I guess in Hollywood speak, her career wasn’t going well.

Anyway, back in 2005, Valerie Cherish is a struggling actress who lands on a show called, “Room and Bored” where she plays Aunt Sassy whose tagline is, “note to self: I don’t wanna see that.” And she also wears an ugly track suit. Room and Bored reminds me of Three’s Company meets first season of “Facts of Life” meets “Too Close for Comfort“…meets just not good television.

This entire show is seen through Valerie Cherish’s eyes because while she is filming “Room and Bored,” she is also being filmed by a reality show crew that wants to chronicle her comeback. The two go hand in hand. One of the prerequisites for being on “Room and Bored” is that there is a documentary made about her and her fighting to get back in the spotlight. She doesn’t really need the spotlight or the fame or money. She’s got a very kind husband named Mark and she’s pretty well off so she doesn’t really need it but she wants bad like super badly.

In Valerie’s real life, she’s supported by not only Mark but her hairdresser, Mickey, who is constantly by her side. Despite this, she’s constantly searching for more and hoping to find it in Room and Bored and this reality show. She wants desperately for someone to “give her another take.” In one of the earlier episodes, where they’re filming a scene for the show, she asks to another take which leads to the audience chanting for another take. That’s exactly what she’s searching for, that other take, that do-over where she can do it better the second or third time around. 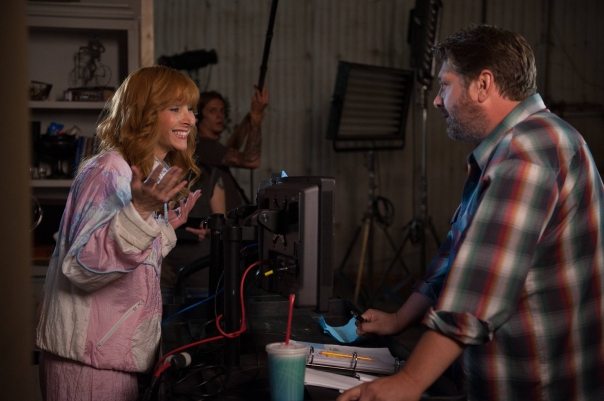 On Room and Bored there’s this really mean writer guy named Paulie G. who has this grudge against Valerie and you’re never really sure what the cause of it is. You never see Paulie G’s story, you only see Valerie’s, so you just see her being humiliated like when she has to wear a giant fake pink cupcake costume and spin around and stuff or when she walks by the writer’s room one night to drop off treats to the writers and catches them making fun of her and stimulating what it would be like to have sex with her. You feel bad but you wonder how much of this humiliation is her doing?

Valerie reaches her breaking point with Paulie G and she punches him which results in them both vomiting. It should be noted though that Valerie’s breaking point, when she finally punches Paulie G, is when she’s dressed in that giant cupcake costume but that’s not the final humiliation of Valerie Cherish. That final humiliation comes when Valerie has a party for the premiere of the reality show aptly called, The Comeback. We get the see the edited show which makes Valerie look horrible. She sounds angry and mean and looks awful which leads to her quitting The Comeback but the next evening, she appears on Leno and the reaction from the audience is so positive that she ultimately agrees to do a second season of The Comeback.

That second season though takes nine years. After 2005, the show was canceled, but built up a major cult following like Arrested Development or Freaks and Geeks. The Comeback finally came back in 2014 for its second season and a lot has changed in those years. Back in 2005, reality shows were really just beginning. Survivor, American Idol, America’s Next Top Model, The Bachelor….people doing anything for fame was still kind of a new concept. Now, we’ve got the Real Housewives of Whatever or the Kardashian family that we are all required to keep up with, people becoming successful on a reality show or looking for a fame on show like that no longer seems strange. So enter, the second season of The Comeback.

When it returns, we see Valerie Cherish trying to film her own pilot so she can pitch it to Andy Cohen (who hosts all the Real Housewives shows). “Room and Bored” has long since been off the air and Valerie is trying to find her way back to the spotlight, but as Valerie is working on this pilot, we learn that Paulie G is now a recovering heroin addict and he is pitching a show to HBO called, Seeing Red about his time working on a sitcom starring a fictionalized version of Valerie Cherish named, Mallory Church. Mallory Church is painted as a whiny, mean and awful person. Valerie retaliates by at first trying to issue a cease and desist order to halt production but ultimately ends up auditioning and winning the part of Mallory Church much to the dismay of her husband, Mark.

Valerie so badly wants the spotlight that being in an HBO show — even a show where she seems to be playing a horrible version of herself — will do just fine apparently. Now, this show keeps referring to things that are apparently meta, and I still can’t get over the part when during a fight with Paulie G about the direction of Mallory and making sure that viewers don’t mistake Mallory for Valerie, Paulie G points out that Matt LeBlanc is not really playing Matt LeBlanc in Episodes and then Valerie who is played by Lisa Kudrow responds with, “well, Matt LeBlanc is not giving you a blowjob.” It’s very, very whoa… 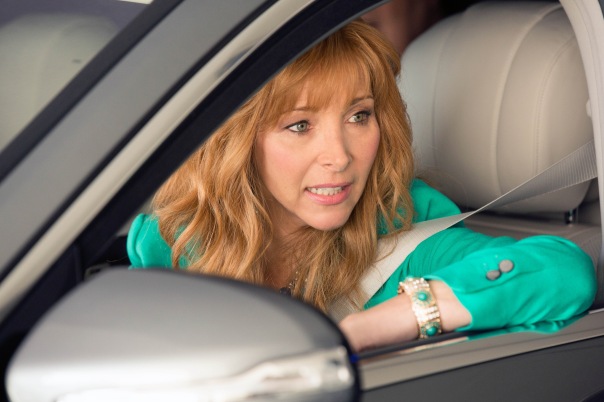 At the same time that production is moving forth on Seeing Red, Jane is at the helm is once again, producing Valerie’s second comeback. Oh, yeah, Jane had been the original producer of The Comeback, the reality show filming Valerie’s every move during her time on Room and Bored and now she’s filming Valerie’s every move on Seeing Red. At first, Jane keeps her distance but she soon starts to interfere more and more in Valerie’s personal life when soon both the reality cameras and the Seeing Red cameras move into Valerie’s house disrupting her life and soon her marriage.

Mark moves out and while trying to reclaim her fame, Valerie tries to save her marriage. During a grueling shoot in the desert where she is supposed to be locked in a trunk with snakes, she snaps. She loses her temper and we start to see the real Valerie. Valerie who wants to save her marriage and Paulie G unnecessarily prolonging the desert shoot causes her to lose it. 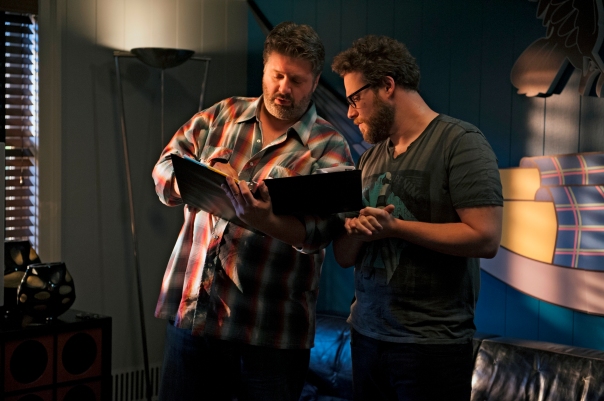 When Seeing Red premieres, it starts to get more and more positive feedback but the more press it gets, the more Valerie’s marriage suffers. Valerie and Mark are falling apart and when she reluctantly (due to Jane’s insistence) decides to secretly tape record a dinner conversation between herself and Mark, the marriage implodes. Mark reveals secrets about the marriage, her abortion, his affair and she shows him that she is recording the conversation. This leads to a brutal fight in the parking lot where they argue about who has sacrificed more for the marriage and when Mark tells Valerie that he believed in Valerie when no one else did, Valerie has the best speech ever:

It’s the best speech ever. I think it should be on one of those motivational posters with the kittens.  By the way, Seeing Red had been doing so well that it garnered her an Emmy nomination and just as she’s getting what she wants, just as the Television Academy is seeing her as “someone,” just as she’s reached that level of being “someone,” the reality is still there. The truth is still there and when she gives Mark his ticket to the Emmy Ceremony after their explosive fight, Mark wonders who she is and also wonders if getting that Emmy, if finally getting that spotlight will be worth it.

Her relationship with Mark isn’t the only thing that suffers, Mickey is suffering. Mickey, her hairdresser who has never left her side, is suffering from cancer and when both he and Mark are no shows at Emmy Awards, the real Valerie Cherish starts to come through. When she gets a text from Mark saying that Mickey is in the hospital, she makes the decision. She leaves the ceremony. She breaks down waiting for the limo when she realizes Mark was the one who knew how to work the Uber app on her phone and we finally get to see Valerie.

Lisa Kudrow gave an interview where she said that last scene where Valerie runs out on the Emmy ceremony was inspired by a moment in her own life when her son was in the hospital and she couldn’t get to him fast enough. You see that fear in Valerie and you see the truth in the way it’s shot. All of The Comeback is shot through the lens of a reality camera, the angles and shots and camera pans are never smooth.  It’s shot through a hand held documentary lens — until the end where it switches to the more normal, typical way. Oh and Valerie does win her Emmy. She gets it all. She gets to be with the men she considers her favorite two and she gets her award. She gets what she wants, which is also the title of that episode.

The last scene of The Comeback is the best. We watch as Mark and Valerie walk hand and hand down the hospital corridors. We watch them disappear, hopefully saving their marriage. It’s the perfect, happy Hollywood ending. Still no word yet on if it’s coming back or not and I so hope it does and I so hope Lisa Kudrow gets all the awards and even if I never quite get exactly what meta is supposed to mean, it’s just so incredible and fantastic and every part of the show means something and I just don’t care. Everyone needs to watch. And everyone needs to give Lisa Kudrow awards.

Meredith Lee is a born and raised Valley Girl who watches way too much television and has seen every episode of “Friends” at least ten times. She always looks up the spoilers to reality shows before watching so she can prepare herself for the outcome, enjoys eating brunch and exploring Los Angeles, and also likes shopping, sitting and napping. She recently began blogging, and can also be found on Twitter andFacebook.

Posted on March 3, 2015, in All the Spoilers, TV and tagged lisa kudrow, the comeback. Bookmark the permalink. 2 Comments.