John Tells Liz What Happened In “The Mortal Instruments: City of Bones”

John Ross is back! John Ross is back! Having survived “50 Shades of Grey” and “The Host,” he’s once again about to reveal the secrets of lady-focused drama. Is it because he loves the act of epistolary recapping? Or because this blog gives him a reason to do things like watch movies based on young adult fiction? That is between John Ross and his maker. All I know is, we benefit. 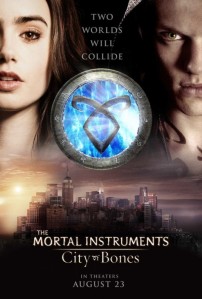 My expectations were below gutter level when I went to see The Mortal Instruments: City of Bones. At the time, it was at 13% on Rotten Tomatoes and based on my previous experience with a young adult novel franchise turned movie — The Host — I made sure to sit near the back just in case. But then halfway through the movie, when I did in fact have to go to the bathroom, I found myself holding it because I didn’t want to miss anything. Whether it was intentional or not — I still can’t tell — this movie is fun to watch!

Now I know the point of this is to fill you in on everything that happens in the movie but honestly I couldn’t tell you. I had no idea what was going on half the time. Like other teen novel adaptations, you get the sense that the filmmakers had to leave in everything from the book or face the wrath of its fans. (Too bad the World War Z novel wasn’t popular with teenage girls.) But that’s what I love about these young adult novel adaptations: Were it not for this fear of pleasing the fans, no one in their right mind would make a movie as batshit insane as this one. END_OF_DOCUMENT_TOKEN_TO_BE_REPLACED

Posted in All the Spoilers, Movies, Other People Telling Liz Stuff

John Tells Liz What Happened In “The Host”

Remember when our friend John told us about “50 Shades of Grey“? What a good time that was! And now he’s taking on another bit of “Twilight”-adjacent storytelling. Because Hugh Jackman forbid we actually watch “The Host” ourselves. 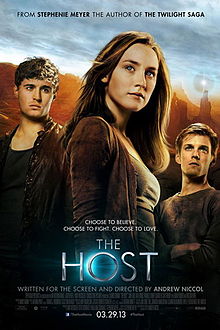 First, a quick disclaimer: When I saw The Host, there were teenage girls in my theater and they were all laughing out loud at the same parts that made me laugh out loud, so while I usually try to go easy on movies for which I know I am not the target audience, I have no qualms with tearing into this one. Besides, The Hunger Games was my favorite film of last year, so maybe I am the target audience.

Believe it or not, I didn’t know that Stephenie Meyer was a member of the Church of Jesus Christ of Latter-day Saints, but it doesn’t surprise me in the least. LDS church members are compelled to get married very early in life and abstain from sex until marriage, unfairly burdening all their romantic decisions in high school with the weight of eternity. So it’s no surprise that Meyer’s characters routinely struggle with their hormonal impulses as this directly conflicts with the marriage vows that they will eventually be bound to until the end of time. No doubt her work connects with young people growing up in similar environments, but for the rest of us it gets really irritating.

Ironically, no one is as preoccupied with sex as people who have been taught that sex is evil or sinful, and that’s what makes Meyer’s characters so incredibly frustrating: No matter what’s happening, you’d be hard pressed to get them to think about anything but their hormones for five fucking seconds! END_OF_DOCUMENT_TOKEN_TO_BE_REPLACED

Posted in All the Spoilers, Movies, Other People Telling Liz Stuff

Ana wakes up the next morning to find herself in Grey’s hotel suite in Portland where they did the photo shoot. Don’t worry, they didn’t do anything. As he explains over breakfast, he won’t touch her unless he has her “written consent to do so.” What does he mean by that?! Refrain. He assures her that all will be revealed later that night, at which point, I guess, he will finally touch her. But in the elevator, he can’t seem to contain himself and—pinning her arms above her with one hand and grabbing her hair with the other—proceeds to try to fit her whole head in his mouth. Afterwards, he promises to never do that again until the paperwork is signed. What paperwork?! What is this mysterious man’s mysterious secret?!

Now, we go further down the rabbit hole, as things intensify for not-Bella-and-Edward’s relationship, as does John Ross’s use of “Ghost Recon: Future Soldier” as a coping mechanism… 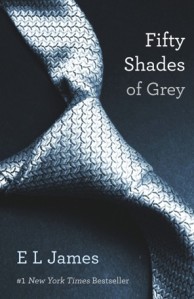 I wish I could say that a lot of what you’re about to read was made up by me or embellished for comic effect. Such is the sadness of the Fifty Shades of Grey experience: reading it, knowing it is not a joke. Until the ending, that is, when another writer seems to suddenly take over, but we’ll get to that.

That night, Christian picks Ana up and flies her via helicopter to his penthouse apartment complex. After Ana signs a non-disclosure agreement (kinky!), she’s all ready for him to make love to her. But Christian needs to explain something to her first: he never makes love, he fucks…hard. Record scratch! Big reveal: Christian Grey is a dominant, and the only relationships he’s ever had were with women who agreed to be his submissives. This is the only kind of relationship he’s ever had, ever will have, and ever wants to have. And if Ana signs a contract, she can be his submissive too! END_OF_DOCUMENT_TOKEN_TO_BE_REPLACED

Because one of Liz Tells Frank’s proudest traditions is other people telling me about stuff, I immediately said to this nice Nebraska-born young man, “You should tell me about it so that I don’t have to tell Frank about it!” He proceeded to buy the book that night at his local grocery store (because apparently they are seriously selling “50 Shades of Grey” in grocery stores). And then, everything for John changed. For the better? Let’s find out….

Fifty Shades of Grey tells the story of Anastasia Steele, leader of a four-man Ghost Team call-signed “Hunter,” tasked with extracting an arms dealer named Christian Grey from a terrorist-controlled compound in Sucre, Bolivia. After using her remote surveillance drone to tag and execute the surrounding hostiles, Anastasia at last breaches the compound — taking out the last remaining guard with a silenced double-tap.

His body drops to the floor to reveal Christian Grey, bound and tied to a chair — her objective. She flushes. She can see the heat radiating from his toned physique through her thermal optic tac scope. Her breathing accelerates. Her optical camouflage deactivates and she starts to feel a pinch down there. Her subconscious is pinned down but her inner-goddess is providing cover fire—there’s just something about him that she can’t keep away from!

That is a pretty accurate snapshot of my psyche while reading Fifty Shades of Grey. I played a lot of Tom Clancy’s Ghost Recon: Future Soldier, because it was the only way I was going to get through the book—by taking frequent breaks to kill people. It was rough, Liz. There were moments when I wanted to take the book out to my driveway, run it over with my car, then light it on fire — for example when I would read an exchange like this:

END_OF_DOCUMENT_TOKEN_TO_BE_REPLACED 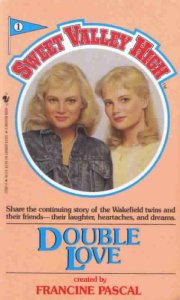 It only took about thirty years, but I think the young ladies of today have stopped reading Sweet Valley books. To which I say — oh, THANK GOD.

See, Frank, when I told you what happened in Are You There God, It’s Me Margaret, I mentioned that I was giving you one of the true secrets to understanding women. Sweet Valley High is another one. It’s not because it has any real insight into the reality of being a teenage girl — Buffy the Vampire Slayer offers a more realistic portrayal of high school life — but the genius of Sweet Valley is that it had nothing to do with reality. instead, it preyed on the deepest insecurities of young ladies, simultaneously coming off as aspirational and soul damaging. Reading these books could fuck you up for life. Let me explain how. END_OF_DOCUMENT_TOKEN_TO_BE_REPLACED

Liz Tells Frank What Happened In “The Hunger Games” (Sorta.) 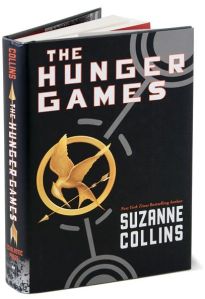 This week, I’m deviating a bit from our established pattern to tell you about something not so you can skip watching it, but instead to encourage you (and others) to enjoy it. See, Frank, I am fully aware of the fact that you are a cultured man who has read many books, long complex books that use big words. I bet you’ve even finished a David Foster Wallace novel! Maybe not Infinite Jest, because c’mon, but certainly maybe one of his shorter works.

So I understand that young adult fiction might not necessarily be your genre of choice. But The Hunger Games, a post-apocalyptic trilogy of novels written by Suzanne Collins, is a terrific and heart-breaking ride. And you should read it.

I’m making a big thing of this because I first read The Hunger Games about three weeks ago, and the second I started talking about it, it turned out that, like, half of my friends had also read it! And had not told me about how great it was! Which is bullshit! Friends, I mean no offense, I know you lead busy lives, but stuff like this is IMPORTANT, okay? (Sure, this would have all been avoided had I been reading IO9 regularly, but whatever.)

Anyways, here are the basics: In a bleak post-America totalitarian empire called Panem, 12 districts live under the thumb of the Capital, which every year demands a “tribute” of one teenage boy and girl, who are forced to compete in a televised fight to the death. (Yeah, another social commentary on the evils of reality TV, though to Collins’ credit it doesn’t belabor this point too hard.)

Posted in Books, No Spoilers