Every time I watch it, I’m not really sure of the answer. I mean, I adore some percentage of it, and I loathe some other percentage, and because the movie is fundamentally schizophrenic, that percentage is never the same twice.

But there is a lot to love, especially if you’re like me, and looking up cast lists on the IMDB is like breathing. EVERYONE is in this movie, Frank. END_OF_DOCUMENT_TOKEN_TO_BE_REPLACED 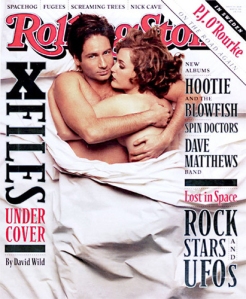 As you know because we are friends, there was nothing more formative for me as a lass than The X-Files. It indulged and deepened my love of science fiction, taught me the difference between procedural and serialized storytelling, and (most importantly) created a teenage ideal for future relationships that still lingers, ever so slightly (I have a thing for trenchcoats).

But I had forgotten until recently, Frank, how COMPLETELY EFFED UP The X-Files was as a comprehensive narrative. Especially (SO VERY ESPECIALLY) when it came to the core relationship between Special Agents Fox Mulder and Dana Scully.

No one would deny that the partnership, friendship and eventual romance between Mulder and Scully was the closest thing The X-Files had to an emotional center, especially myself. But when you look at the sequence of events that occurred over the show’s later seasons, it made NO SENSE, on a storytelling level or a human level.

Here is why I mention it. A few weeks ago, a friend of mine IMed me with a simple question that she had a valid professional reason for needing an answer to: “When do Mulder and Scully first kiss?” (Frank, it should not surprise you that I was the person she thought to ask that question.) Because Aimee signed off before I could respond, I was forced to send her the following email:

END_OF_DOCUMENT_TOKEN_TO_BE_REPLACED

Let us continue our descent into nostalgia, shall we? Of course, when it comes to today’s topic, you probably have less nostalgia to deal with than I do.

Frank, if you’ve forgotten, Bridget Jones’s Diary is a year in the life of a slightly spacey 30-something lady, who originated in the newspaper columns of Helen Fielding. When given the opportunity to turn her columns into one of the first great examples of the chick-lit genre, Fielding riffed off the plot of Jane Austin’s the BBC’s Pride and Prejudice—

Wait, Frank, because you are not a girl, you may not have watched the BBC Pride and Prejudice mini-series (which was basically the Downton Abbey of its day), so if you’ve forgotten the bare essentials of that story, here they are: END_OF_DOCUMENT_TOKEN_TO_BE_REPLACED

It’s kind of profoundly intense these days, to remember the spring of 1999 and how very, very fucking excited we nerds were for Star Wars: Episode 1. Remember that? Remember talking about the trailers and debating casting spoilers and not even doubting a little bit that it would be awesome? And then we all actually saw the movie, and… yeah.

I saw Phantom Menace three times in the first five days of its release, each time having to work harder to convince myself that it wasn’t really that bad, until finally I searched my feelings. I knew it to be true. And then I pretended the movie didn’t exist for ten years.

However, it’s my brother’s birthday this week, and to celebrate I said I’d take him to the movie of his choice. He picked the shiny new 3-D transfer of The Phantom Menace. Now, honestly, this could be a lot worse — for his birthday in 1999, I took him to see the PAINFULLY bad Wing Commander, because the Phantom Menace trailer was premiering before it exclusively. END_OF_DOCUMENT_TOKEN_TO_BE_REPLACED

Normally, I write these missives to tell you about stuff you have a real need to know about; this week, though, we’re going to try something different. Because you are a human being who was alive in the year 1997, I’m fairly confident that you’ve seen the movie Titanic — but the thing about a meticulously made three-hour epic is that time fades away certain details, especially if you weren’t one of those Titanic-holic teenyboppers who rewatched it obsessively on VHS.

I wasn’t one of them, myself — I’ve probably seen the movie, start to finish, four times total, including last night’s viewing. But Frank, I was SHOCKED by how little I remembered. Perhaps these are things you’d also forgotten about? We’ll find out!

First huge thing I’d forgotten? Frank, it takes 24 minutes for anyone to actually set foot on board the Titanic. For perspective’s sake — that means there’s an entire Two Broke Girls-worth of Bill Paxton and his crew of submarine duders rummaging around the Titanic wreckage and not believing the old lady who says that she’s Rose, the naked hottie from the drawing they just pulled out of a submerged safe.

Oh, and the REASON these guys are going all out in their Titanic investigation? Frank, this entire fucking movie is a jewel hunt! END_OF_DOCUMENT_TOKEN_TO_BE_REPLACED