“Liz Tells Frank What Happened In…” The Books!

Do you enjoy Liz Tells Frank, but wish that it could be a little bit more… eBook-y? Boy howdy, you’re in luck!

The Skip It/Watch It Guides 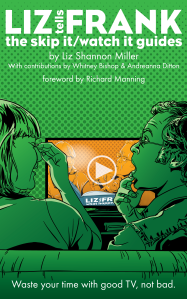 Great television can be like a dense forest — full of wonders, but full of dangers. It’s easy to get lost. That’s why there are the Skip It/Watch It Guides, here to help you navigate around the lightning sand and R.O.U.S.s.

Liz has been weeding out the least successful installments of good shows for two years now, and for this collection she’s created original guides for some of television’s most iconic series, including Buffy the Vampire Slayer, Battlestar Galactica, Doctor Who, The West Wing and The X-Files.

Featuring contributions by Whitney Bishop and Andreanna Ditton, as well as a foreword by Farscape executive producer Richard Manning, Liz Tells Frank: The Skip It/Watch It Guides is a fun, irreverent and occasionally highly subjective look at the great TV of the past two decades. Because friends don’t let friends watch bad episodes.

Available now on Amazon for the low low price of $2.99! 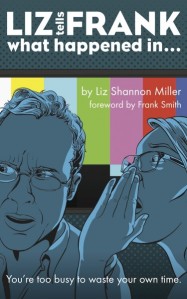 Liz Tells Frank What Happened In…: Volume 1 can now be downloaded FOR FREE from digital bookseller entities including Amazon, Barnes and Noble, Smashwords and Apple!

Volume 1, with a foreword by the eponymous Frank Smith and cover art by Asa Shumskas-Tait, contains classic entries like Batman and Robin, Night of the Living Dead, Showgirls and Left Behind — plus five book-exclusive entries covering everything from Oscar-nominated The Help to Joss Whedon’s Dollhouse to the 2002 Rollerball remake.

From “Liz Tells Frank What Happened In Rollerball“: 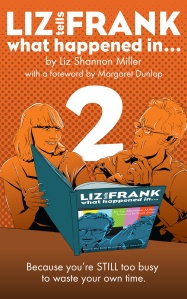 Liz Tells Frank What Happened In…: Volume 2 brings together another 20 classic entries, including The Cabin in the Woods, Dance Moms, and the 1996 Doctor Who back door pilot. In addition, exclusively for the book, Liz tells Frank about nerd classics like The Courtship of Princess Leia and ALL SEVEN SEASONS of The West Wing.

Volume 2 is now available on Amazon, Barnes and Noble, Smashwords and Apple for just $0.99!

“There’s a lot of joy in this book, as well as humor. I laughed A LOT, especially the Bones recap. If you like pop culture you’ll enjoy this.” — Felicia Day

“Something that will restore your faith in both humorous books and Americans in general… Liz is pretty awesome. She is the best kind of geek, the geek who genuinely loves these things and can talk about them eloquently.” — El Dink

“Liz has lots of feelings… and they’re all hilarious.” — Barrett Garese

“I have already purchased a copy of my very own. At $2.99, can I afford not to own a copy of Liz Tells Frank? I don’t think so.” — Margaret Dunlap (The Lizzie Bennet Diaries, Eureka)

“I always enjoy your deadpan wit and utter disregard for some things.” — commenter Lieke

“The less free time I have, the more I appreciate [Liz Tells Frank].” — Sam Haber

“It was hysterical. The kids were yelling that I couldn’t be ‘working’ if I was laughing that hard.” — Cyndy the copy-editor