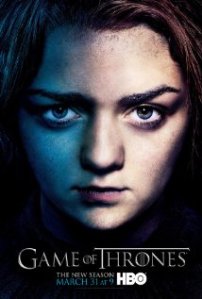 I’ve been trying, of late, to be a bit more conscious of how much profanity I use. I mean, I am after all a lady, and ladies don’t say things like “motherfucker” on a regular basis, best I’ve been lead to believe.

But any effort to reign in profanity is OFF THE MOTHERFUCKING TABLE this week, Frank. Because we have SERIOUSLY FUCKED-UP BUSINESS to discuss.

I told you about the Game of Thrones pilot, Frank, once upon a time, and since then the show has been a consistently exciting and entertaining presence on HBO’s schedule.

As Ben Wyatt (the closest thing to a dude version of me currently on network television) puts it in an episode of Parks and Recreation, “They would never cancel Game of Thrones. It’s a crossover hit! They’re telling human stories in a fantasy world.”

I don’t even mind the fact that it has zombies in it! Because I always love it when a solid genre show goes watercooler, and Game of Thrones has done a great job of keeping the drama tight while slowly introducing dragons, magic and other weird stuff into the narrative.

But Game of Thrones has also evolved into an incredibly fucking complicated show, Frank, full of families and allegiances and filthy middle-aged white men wearing cloaks who quite honestly start to blend together every once in a while. Which means that when something as insanely huge as this last Sunday’s episode happens, you and others who haven’t been keeping up with the show might find yourself a bit confused as to why everyone is freaking the fuck out.

Fortunately, for our purposes today, it is relatively simple to explain in broad strokes what happened during the ending of “The Rains Of Castamere,” Episode 9 of Season 3, during a scene known commonly as “The Red Wedding.” Strokes like sword swings? Sorry, I’m getting ahead of myself.

Here’s all you need to know to understand the reason why the Internet has had a collective spasm: In Season 3 of Game of Thrones, this guy Robb Stark has claimed himself to be King of the North of Fantasy Kingdom, and is at war with a bunch of other guys, who all think they should be Fantasy Kingdom King.

In order to win that war, Robb needs to make a deal with this other guy Walder Frey (who I’ve now decided to refer to as CreepyDick for the duration of this post, because what a creepy dick) where Robb agrees to marry one of CreepyDick’s (legendarily ugly) daughters in exchange for the support of CreepyDick’s armies.

However, Robb is a young man and the heart wants what the heart wants — specifically, a sweet young thang he met on the battlefield. The two of them get married, which Robb knows will royally piss off CreepyDick, but he basically figures he can say “sorry” real real nice and get away with it. 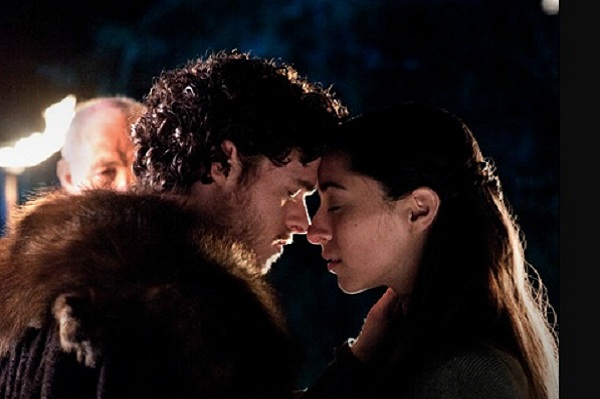 LOOK AT HOW HAPPY THEY ARE! WHAT COULD POSSIBLY GO WRONG?!?

This becomes an issue when Robb REALLY REALLY needs CreepyDick’s armies for a big plan that’ll totally change things up for this war he’s fighting. So they reach out to CreepyDick and CreepyDick is like, sure, it’s all good as long as your uncle marries one of my (legendarily ugly) daughters.

Robb’s mom Katelyn supports the plan, and she’s pretty savvy on this shit, so while said uncle is not particularly thrilled with the idea, they go for it. (I’m not going to even bother with the extreme misogyny of this plot element — like, oh, I’m sorry, you’re being forced to marry for politics instead of love? WELCOME TO BEING A WOMAN BEFORE THE YEAR 1900 LIKE ALL THE TIME INSTEAD OF JUST THIS ONE INSTANCE.)

Thus, they arrive at CreepyDick’s castle, and CreepyDick reveals all his ugly daughters and is a creepy dick towards Robb’s Sweet Young Thang — who is now his Pregnant Sweet Young Thang, bee tee dubs. But then the actual wedding happens, and it turns out CreepyDick was holding out on Robb, because Robb’s uncle actually ends up marrying a beautiful dewy young maiden!

Everything seems to be going so well! Especially because spunky young Arya Stark, who’s been separated from her family for the last two seasons for various reasons, is just about to arrive at CreepyDick’s castle and finally be reunited with her mother and older brother, which is nice! So clearly, things are about to take a turn, especially when at the wedding reception CreepyDick seems just a bit too smug…

Actually, Frank, I think the best way for me to explain what happened during the Red Wedding is to recreate what the script for this scene must have looked like. I don’t have access to the production drafts, but I’m pretty sure it was something like this: 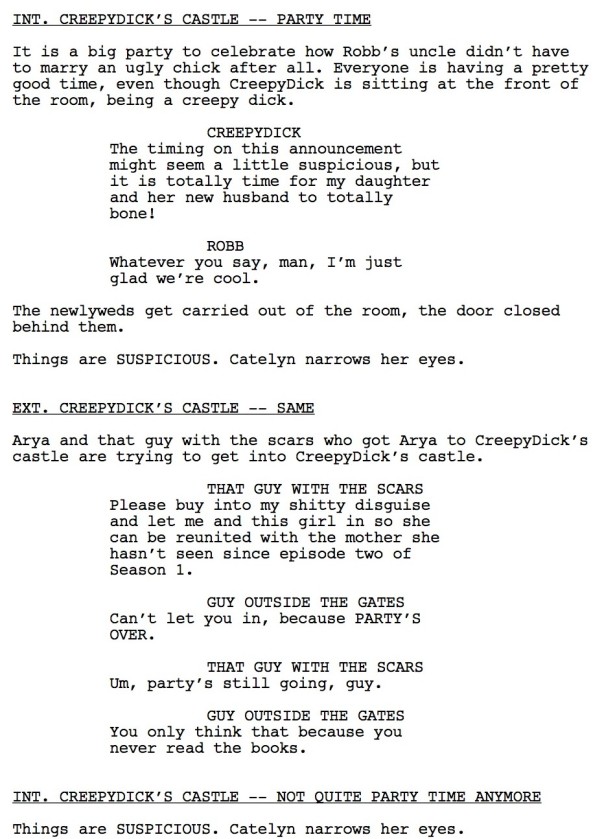 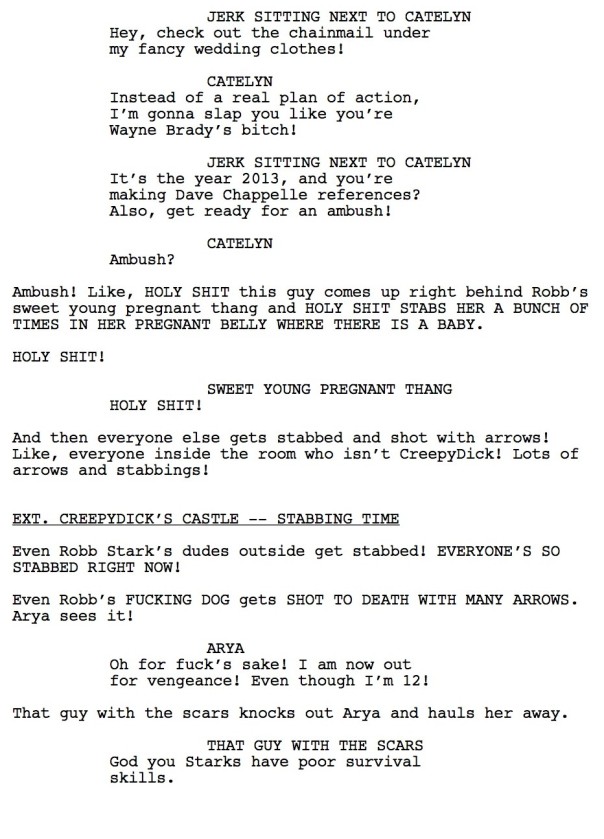 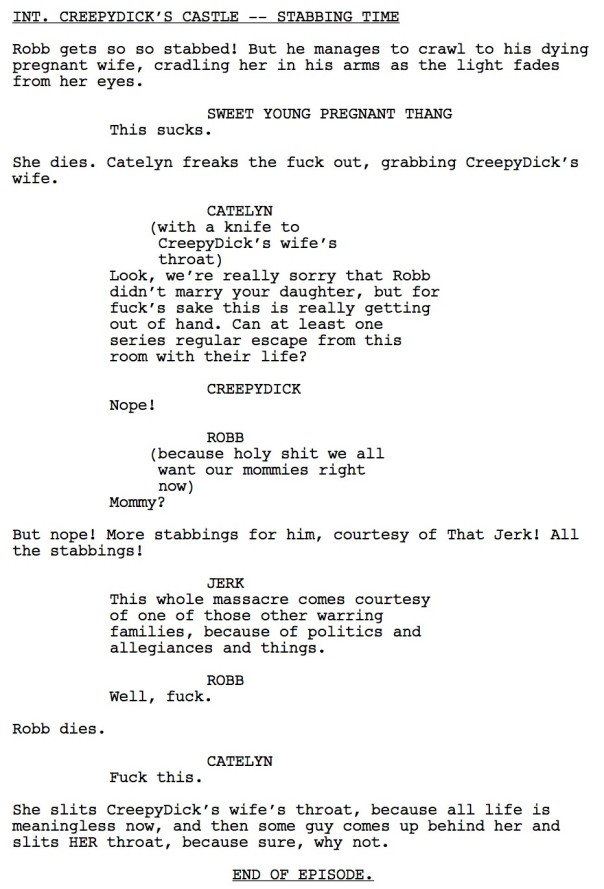 Frank, there are many people in this world, I am sure, who are dear to you. I have a humble recommendation: Maybe take each of them aside at some point in the near future, hold him or her close to you, cherish feeling in your arms the inhale and exhale of their breathing, their physical self.

And then, don’t ever bring them to any weddings.

Don’t forget! Liz Tells Frank is available in eBook form! One of which contains secrets, and the other of which is freeeeeeeeeee!

Posted on June 3, 2013, in All the Spoilers, TV and tagged Game of Thrones, george r.r. martin, hbo, Red Wedding. Bookmark the permalink. 3 Comments.