In case you missed it, a couple of days ago your friend and mine, John Ross, stopped by to tell me what happened in the recent young adult adaptation The Mortal Instruments: City of Bones. Aside from delighting us all with tales of Lena Headey kicking the shit out of things and maybe-incest, he reminded me that I’ve never gotten around to telling you what happens in the young adult novel/soon-to-be major motion picture Divergent.

Divergent, let’s be clear, is very much of the post-Hunger Games publishing craze — which is to say that without Katniss Everdeen, there is no Tris Prior, and without Suzanne Collins, there is no Veronica Roth on my Kindle.

But to Divergent‘s credit, it was a relatively early entry in said craze, making it almost not feel like pure bandwagon-hopping. And given the recent release of a teaser trailer, and the fact that Kate Winslet (!!!!!) is in it, Divergent seems like something you should at least have a passing familiarity with. Especially because this book be WEIRD, yo. END_OF_DOCUMENT_TOKEN_TO_BE_REPLACED 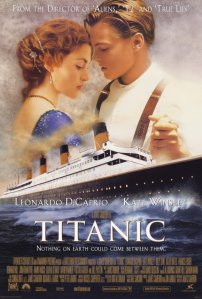 Normally, I write these missives to tell you about stuff you have a real need to know about; this week, though, we’re going to try something different. Because you are a human being who was alive in the year 1997, I’m fairly confident that you’ve seen the movie Titanic — but the thing about a meticulously made three-hour epic is that time fades away certain details, especially if you weren’t one of those Titanic-holic teenyboppers who rewatched it obsessively on VHS.

I wasn’t one of them, myself — I’ve probably seen the movie, start to finish, four times total, including last night’s viewing. But Frank, I was SHOCKED by how little I remembered. Perhaps these are things you’d also forgotten about? We’ll find out!

First huge thing I’d forgotten? Frank, it takes 24 minutes for anyone to actually set foot on board the Titanic. For perspective’s sake — that means there’s an entire Two Broke Girls-worth of Bill Paxton and his crew of submarine duders rummaging around the Titanic wreckage and not believing the old lady who says that she’s Rose, the naked hottie from the drawing they just pulled out of a submerged safe.

Oh, and the REASON these guys are going all out in their Titanic investigation? Frank, this entire fucking movie is a jewel hunt! END_OF_DOCUMENT_TOKEN_TO_BE_REPLACED