“Fringe” Season One: The Skip It/Watch It Guide 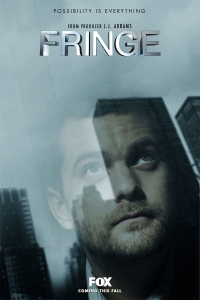 Hey, want to check out on the complete series? A guide to all five seasons of “Fringe” can be found in “Liz Tells Frank: The Skip It/Watch It Guides,” now available on Amazon!

A few weeks ago, I spent a whole bunch of words telling Frank how great the show Fringe is. But I included this one caveat: The first season is pretty problematic, as it darts between narrative-heavy developments and stand-alone monster episodes almost at random. That might have worked for The X-Files in its day, but screw The X-Files, it’s the 21st century and Chris Carter floats in exile on a surfboard. We can demand more from our TV, is what I’m saying.

So (because I have had at least four friends request it) here is a guide to watching Fringe that should help you avoid the less consequential episodes and focus on the good stuff that relates to the ongoing narrative. I try to add as much guidance as possible when it comes to the Watch It episodes, so that if you’re on the fence about a particular storyline you can use your own judgement. But otherwise, trust in me to steer you around the dull bits.

Fringe Season One: The Skip It/Watch It Guide

1. “Pilot”: Watch it. Yeah, suck it up, you have to watch the pilot. It, y’know, explains who the characters are and what the basic premise of the show is. And it’s got its moments: In the first five minutes, for example, a guy’s jaw falls the fuck off. It is as gross as you might imagine.

2. “The Same Old Story”: Skip it. This episode, right here? This is the problem with Fringe season one — a stand-alone episode that has its moments, but is pretty much just “let’s investigate strange phenomena!” Trust me on this: That’s not why you want to watch Fringe.

4. “The Arrival”: Watch it. Actual shit happens. The first major hints of the Bishop back story come out here, and it leads into…

5. “Power Hungry”: Watch it. Not as key to the show’s mythology, and includes some kinda silly pseudoscience, but it does feature some developments to the narrative. Plus, extra Mark Valley for you Mark Valley fans. (There has to be at least one Mark Valley fan out there.)

6. “The Cure”: Skip it. There are better episodes coming up.

8. “The Equation”: Watch it. This is one of those Fringe episodes which seems stand alone, but actually proves key to the ongoing narrative. With bonus Britta-from-Community guest appearance!

9. “The Dreamscape”: Skip it, unless you’re one of those aforementioned Mark Valley fans and are super-engaged in Olivia’s relationship with him. Personally, though, I was bored with them by this point.

Halfway through the season! Let's take a quick break and look at Peter Bishop, shall we? Hi, Peter Bishop! Mmmm, yes. Hi.

11. “Bound”: Watch it. Resolves events from “Safe,” and also introduces Olivia’s sister and niece, who add nice layers to Olivia’s character. For Olivia, you may have noticed by this point, isn’t much for smiling, but Anna Torv is fucking gorgeous when she smiles, and she smiles a lot when her niece is around. So that’s reason enough to watch.

13. “The Transformation”: Skip it. Read a book, go for a walk outside. Maybe try your hand at knitting. You never know what you might enjoy until you try it.

14. “Ability”: Watch it. I can’t even explain how much stuff goes down here. Watch it. Pay close attention. Enjoy. This episode is great.

15. “Inner Child”: Watch it. It’s not an amazing episode, but there’s a twist at the end that casts an interesting light on a key aspect of the show’s mythology. Also, there’s a kid involved, so Olivia smiles some more.

16. “Unleashed”: I’m really torn about this one. On the one hand, it’s kind of just a standard monster episode. On the other hand — and this is what fucking kills me about Fringe, for the record — if you skip this episode, there are one or two tiny references that you won’t get in season two and three. It’s also a big Charlie episode, who doesn’t get much attention but is a character worthy of it. Ultimately, you can probably skip it. But if you’re feeling completist, watch it.

17. “Bad Dreams”: Watch it. You learn a lot more about what happened to Olivia during her childhood, and it sets up a character who’ll become very important down the line.

18. “Midnight”: Skip it. The last monster-of-the-week episode of the season, and not a bad one necessarily — there’s even a final twist that adds an interesting detail to the ongoing narrative. But if you wanted to watch MOTW episodes, you wouldn’t be reading this guide, would you? And if you skip it, then that’s one less episode between you and:

20. “There’s More Than One of Everything”: Watch it. Yeah, the last episode ended with a nice SHOCKING TWIST, but then you get to this episode, in which there are like a dozen SHOCKING TWISTS. At least one of which? Will totally break your heart.

“The Road Not Taken” and “There’s More Than One of Everything” are essentially the dawn of Fringe 2.0, a genuinely great series where every episode is important to the narrative on some level. Fringe 2.0 isn’t perfect — every season of every show is going to have its dud episodes — and it’s built on the hard work of season one. But as you can see, you can get through season one while only watching about half of it. (If you’re a Fringe super-fan, by the way, feel free to yell at me in the comments about why I’m wrong about certain episodes.)

There are a few stand-alone episodes in Season 2 that aren’t necessarily essential, by the way, but only one you should skip: Episode 11, “Unearthed,” is a season one episode that was held over from season two for some reason, and thus has absolutely no relevance to the season plotline. Just pretend it doesn’t exist.

Because otherwise, really, Fringe is so worth the effort. This season has slowed down a little bit, its trajectory very narrow at this point, but I really can’t wait to see where it goes.