Liz Tells Frank What Happened In Every John Grisham Novel Ever 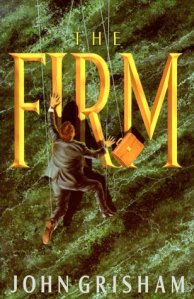 So sometimes, all it takes for an old passion to be renewed is something as simple as Netflix adding The Pelican Brief to its Watch Instantly service. The Pelican Brief AND The Client! What a glorious day that was.

You may not know this about me, Frank, but a large part of my early teens were spent obsessively reading John Grisham legal thrillers. They were my first independent taste of adult fiction — adult fiction that nonetheless can be read by a thirteen-year-old with a very bare-bones understanding of how sexytimes are supposed to work — and from them I gleaned my very shaky understanding of the court system and an odd fondness for jury duty.

But after watching all the Grisham Netflix had to offer and commencing a reread of The Runaway Jury (the only one of his novels I still own, mostly because it’s a weird “traveller’s edition” I bought during a trip to Europe in 1996) I’ve been reminded of why exactly I stopped reading Grisham novels after the age of fifteen — Grisham figured out one story he was good at writing, and while his early novels do enjoy some variation and creativity, he quickly fell into a pattern that has suffered from repetition.

In short, Frank, reading one Grisham novel means that you probably have a good grasp of every other novel, which is part of what made him such a popular author during the 90s. But really, it’s not so much that Grisham wrote the same book over and over again — it’s that many of his books, especially those written between A Time to Kill and The Brethern, take place in a very specific universe.

Here are just some of the Grishamverse’s qualities:

Darby Shaw on the run! With the sportiest pigtails.

Frank, I should be honest and say that this does a bit of a disservice to Grisham, who did attempt to break out of the legal thriller format at a certain point in his career, writing about Christmas and baseball. Of course, he then went right back to the Grishamverse, where the rules are clear and everything eventually works out in the end.

Mocking Grisham is awfully easy, but I do still have a fondness for his particular brand of fiction; all the mockery in the world can’t discount the fact that for a good seven years, he wrote some cracking good reads (many of which made for decent films). I’m just glad to be older now, and to know the difference between a fun book — and a great one.

Posted on April 5, 2011, in Books, Some Spoilers and tagged eh oh watch out for that evil corporation!, john grisham, the pelican brief, the runaway jury. Bookmark the permalink. 3 Comments.