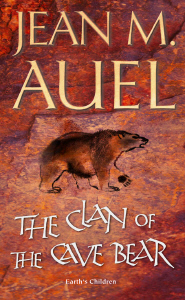 I have never read the Clan of the Cave Bear books or seen the movie before this week, but they’ve always been on the edge of my consciousness. See, my parents had at least one or two of Jean M. Auel’s novels on our family bookshelves, which I spent a fair portion of my childhood raiding in search of books that were probably inappropriate for my age. However, I was never inspired to pull these off the shelf, because while I was aware that they had quasi-sexy bits, cavemen erotica just seemed dirty and weird to me. I.E., not terribly erotic.

As an adult, Frank? My opinion hasn’t shifted much.

But here we go! And let’s start with a big-league apology — I’m a lazy high school sophomore. I watched the movie instead of reading the book. I did this knowing full well that there are fans of the book who’d probably react to me just watching the movie the same way I would react to people skipping Margaret Atwood’s The Handmaid’s Tale for the HBO adaptation (specifically, with blood rage), but sorry, this is what’s happening.

The opening crawl sets the stage as a cro-magnon vs. neanderthal battle in pre-historic times, then we look at cave paintings while the main credits roll– WRITTEN BY JOHN SAYLES WHAT? Wow, I remember when that would have been a REALLY big deal for me. I really liked John Sayles, writer of… Whoa, the last movie he wrote was The Spiderwick Chronicles? Yikes. Poor John Sayles.

We start off by watching baby blond Ayla watch her mom die in a… earthquake? It’s a lot like the scene where Anne Heche’s lady friend in Volcano dies in a crevasse. (What are you talking about? That is not an obscure reference! The 1996 blockbuster Volcano! Co-starring Tommy Lee Jones and Don Cheadle! “The coast is toast!” Shut up.)

Now orphaned, Ayla wanders around until she is discovered by (wait for it) the Clan of the Cave Bear! Which lacks a cave at the moment. We are introduced to other characters, but it’s of minimum consequence, except for the nice medicine woman who officially rescues her. That’s very nice of her. I mean, it probably won’t go well, but it’s still nice.

There’s a lot of chatter amongst the neanderthal duders about what to do about Ayla, and motherfucker is this whole movie subtitled? So far there’s been a shit-ton of voice-over exposition by the lady who also played the main lady shapeshifter on Star Trek Deep Space Nine, but all the prehistoric people talk all prehistoric like and BOOOOOO. (Subtitles complicate my ability to websurf during boring bits.)

The clan decides to let Ayla stick around because the medicine woman likes her, “many seasons pass,” and Ayla gets older (though not yet Daryl Hannah older). They now live in a cave. and Ayla gets shouted at a lot… this movie is not much with the gripping, lemme be completely honest. Though I should mention that I’m prejudiced. The reason I struggle to care about cavemen is the same reason I struggle to care about monkeys — primitive humanity has little interest to me.

(Unlike Volcano! That movie is of extreme interest to me. Remember when they blew up an apartment building to save the Hard Rock Cafe at the Beverly Center? That part was great.) 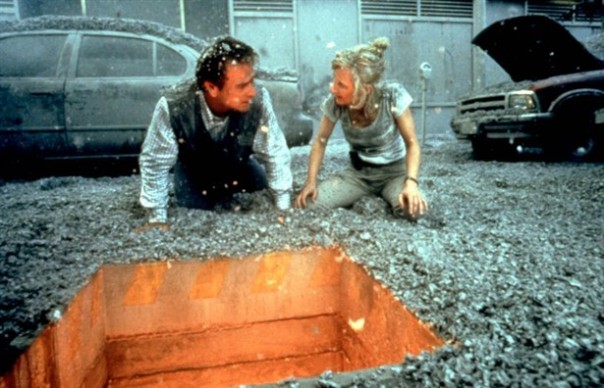 How could you have forgotten about this movie? Look at the chemistry Anne and Tommy have!

Ayla makes friends with one older duder who teaches her how to count — or rather, she reveals that she knows how to count better than the neaderthals, thanks to pure instinct. Because, you know, she’s like an X-Man! Her mutant power: basic arithmetic.

Then some dudes hunt an ox. And then they kill the ox. Frank, this movie is BORRRRRRRRRRRRING.

At this stage, essentially, Ayla gets accepted by the clan. and then finally she’s Daryl Hannah. I don’t know why I say finally. I’m still burned after watching Wall Street, where Daryl Hannah is the worst. But Daryl doesn’t talk much in this movie, which was the worst part of her performance in Wall Street, so maybe we’ll be okay.

Ayla’s place in the clan is serving as apprentice to the medicine woman… and nothing else, because there are strict rules against women touching hunting weapons (according to the subtitles, “clan women kneel”). But then Ayla totally touches a hunting weapon! HAHAHAHAHA.

Unrelated — oh, hey, it’s raping time, courtesy of Broud, whose name I only bothered to look up because he’s an asshole for the rest of the movie, starting now, so I’m gonna have to mention him again later. In case you were wondering, Frank (Frank, I really hope you weren’t wondering), cavemen do it doggie-style. 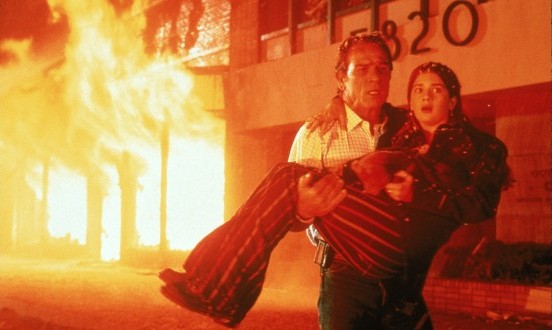 Okay, I actually do have a screenshot of the rape, but I've decided not to use it because ew. So instead here is Tommy Lee Jones rescuing his daughter from volcanic lava! It's a touching scene of parental love set against the high-stakes action of a disaster film.

Daryl, having figured out that she’s literally more evolved than these chumps, starts trying to figure out how to use a sling. TRAINING MONTAGE! Spoiler alert: She gets better.

But she also gets pregnant! Which she’s excited about? Okay, rape culture was different back then, fine. But still, I think Ayla could do with some therapy. Or at the very least a ticket to Xavier’s Academy for Gifted Cro-Magnons.

Ayla gets sick of being raped and not allowed to touch weapons, so she shows off that she knows how to use a sling, but that just gets her banned from the tribe. Of course it does. This movie is a really good movie to watch if you are a lady and you are convinced that the world has it in for ladies forever.

So the clan totally ditches her in some shitty area of Pangaea, but a nice little montage proves that she doesn’t need them. Not only does she start her own fires, build simple tools, and hunt just fine, but she gives birth to her rape baby by herself. Fuck yeah, Daryl Hannah! Well done.

So Daryl survives her banishment, builds herself up into a bad-ass, and then… returns to the tribe to beg for her life and her child’s? Bitch, you’re a superhero, you don’t need these evolutionary slackers. But, whatever.

More time passes! This movie fucking loves its “And then, some time passes” voice-over moments. When Ayla’s son is about four, a gathering of all the clans is called (how? by Skype? it’s never explained), and the medicine lady convinces Ayla to go in her place, specifically so that Ayla can find an official mate.

There she meets a nice guy with blue eyes. And he likes her kid! This is the part where if Queen Latifah were in this movie, she would be like “Grrrrrrl you go get yours!”

And then there a bit where the clan has to fight a bear and the one to kill the bear is the new leader of the tribe. (Neanderthals? A literal folk.) I think that the guy Ayla was crushing on gets murdered by the bear right away, and then the winner of the fight is that dick Broud. Honestly, though I can’t be totally sure because I find it hard to tell cavemen apart. That’s right — I am racist against cavemen. Hey, an actual screenshot from this movie! This is a picture of a caveman. I think it's the dick caveman. Eff this guy.

Between her rapist becoming leader of the clan and some weird prophetic dreams, it’s clearly time for Ayla to exit for more evolved pastures. Well, “seek the others” is how it’s put. The situation is exacerbated when Broud claims her as his mate, makes her kid go live at someone else’s fireside, and tells her she can’t hunt anymore. And when she stands up to him, he sentences her to death! Totally rational leadership decision.

She’s not thwarted, using a rock sling to totally kick the shit out of the guy, but still decides to ditch the clan — including her son! Yikes! She says (or Lady Shapeshifter From DS9 says in voice-over, something like that) that he belongs to the clan and his place is with them. Meanwhile, she has found the strength of her own spirit and is now ready to find her real people. And then she literally walks into the sunset.

In the final credits, there’s someone credited with Clan Body Movement. A for-real thing.

I just looked at the Wikipedia entry for the original novel, Frank, and apparently at the end of the original book, Ayla was banished from the clan and forbidden from taking her son with her! Wow, harsher ending than this one! But don’t worry, in the sequel she finds love. So that’s all right. Right? Right.

Posted on June 23, 2011, in All the Spoilers, Movies and tagged clan of the cave bear, daryl hannah, jean m. auel, racist against cavemen, unnecessary rape. Bookmark the permalink. Leave a comment.