Liz Tells Frank What Happened In “Star Trek”: “The Trouble With Tribbles”

Some kids pick up being a nerd on the streets. I learned it in the home. We’ll never know if the person I am today is the result of nature or nurture, you see, because I am the daughter of nerds, and my mother raised me on Star Trek.

Officially, my gateway drug was Star Trek: The Voyage Home, because I spent most of my childhood trying to decide if I wanted to be a writer or a marine biologist when I grew up, and THERE WERE FUCKING WHALES in Voyage Home. I wanted to be Dr. Gillian Taylor SO FUCKING BAD, Frank, you can’t even imagine — a marine biologist who gets to go to the FUTURE? And gets to go on a date WITH KIRK? I like being a writer, but let’s be clear — I’m settling. 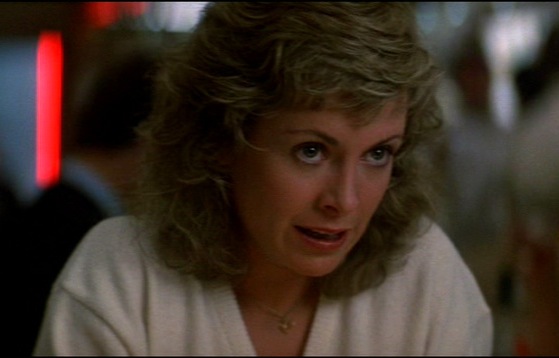 Let's be clear: I'd even agree to the hair.

Shit like that is how you get a little girl into sci-fi. Just for the record. And then Mom sat me down with the original series from time to time, and while some episodes lost me, you’d better believe I loved “The Trouble with Tribbles.” Most of my taste as a kid was pretty suspect, but not in this case — almost fifty years later, “Tribbles” still holds up.

Frank, I know you’re pretty familiar with the first season of (as the nerds call it) TOS — I’d actually wager that in total, you’ve seen more episodes than me. But “Tribbles” is notable for, well, actually being pretty damn funny, with moments of both dry wit and flat-out slapstick. The very first scene is an example of the former: Kirk and Spock are hanging out with Chekhov, quizzing him on some space stuff, and Chekhov makes a joke about being able to smell Klingons in space. Spock reminds him that smell doesn’t travel through space. “I was making a little joke,” Chekhov says. “Extremely little, Ensign,” Spock replies. This is just THE FIRST SCENE and I’m already chuckling. Spock may be science fiction’s greatest straight man.

Anyhoo, the Enterprise gets a Priority One distress call (which is apparently a way worse kind of distress call than your average ordinary sort of distress call), and rushes off to Space Station K-7. When they get there, though, Kirk’s a little bit annoyed to discover that they’ve been summoned by a paranoid Federation bureaucrat in a turtleneck, who wants them to guard some storage compartments.

(Quick question for those who aren’t Frank and also grew up with this episode: Do you laugh when Kirk says “storage compartments STORAGE COMPARTMENTS?” in this scene? Because I laugh every time. EVERY TIME. It might be my favorite line in the whole damn episode. I have NO IDEA why.)

The storage compartments are filled with a super-awesome grain called quadrotriticale (did not spell that right on the first try, fyi) intended for a planet called Sherman’s Planet (good planet name, Sherman). Because Sherman’s Planet is apparently a big deal to the Federation, and its successful settlement will piss off the Klingons, Kirk bitchily assigns just two guards to help guard the wheat, then gives the rest of the crew shore leave on the space station — which seems to consist entirely of storage compartments and a bar. This will go WELL.

Chekhov and Uhura come to the station bar to go shopping (seriously, that’s what Chekhov says they’re doing), which ends up working out because of trader Cyrano Jones, who is attempting to sell the bartender his space wares. Cyrano’s striking out with the bartender but wins Uhura over with a cute little bundle of fake fur identified as a tribble. It is soft and fluffy and coos a lot — tribbles are the best! — though we do immediately see it “munch” on a sample of quadrotriticale Chekhov had. FORESHADOWING. SUSPENSE.

The Federation asks Kirk to take guarding the wheat seriously, to which he agrees in a slightly less bitchy manner than before, and as if to prove their point, a ship full of Klingons shows up! In case you have forgotten, Frank, at this stage in Star Trek history Klingons look like this: 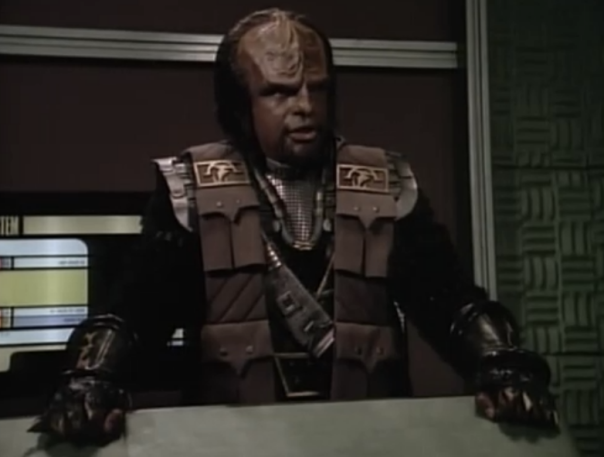 Apparently, there’s an episode of Enterprise that comes up for an explanation for this. But fuck Enterprise. Let’s stick with Lieutenant Worf’s explanation for this lack of continuity, from the DS9 episode “Trials and Tribble-ations” (which is a wonderful post-modern tribute to this episode that I don’t have time to get into): “We do not discuss it.”

The Klingons are allegedly there just for shore leave, but the Turtleneck is very nervous about it and yells at Kirk a lot. Also, Uhura’s tribble had babies! Which she gives away to folks including Dr. McCoy, who uses science to learn that tribbles are mad reproductive machines. FORESHADOWING.

At the station bar, we learn that tribbles don’t like Klingons, Klingons don’t like tribbles, Chekhov likes vodka and Scotty likes scotch. One of the Klingons starts ranting about how Kirk sucks, and Chekhov wants to fight over it, but Scotty is like, no, dude, be cool — until the Klingon insults the Enterprise. And that’s our cue for a BAR FIGHT!!!!!!

It’s a fantastic bar fight, just for the record. People go flying over tables and sliding down the bar and lots of terrible punches are thrown. It makes me so happy. The only thing that makes me happier — Kirk interrogating his crew to find out who threw the first punch, and eventually pulling it out of Scotty. Look, it’s a nice little scene, I’m just gonna embed it below:

Meanwhile, tribbles are EVERYWHERE on the ship. Including in Kirk’s chair! The noise a tribble makes when you sit on it is HILARIOUS, for the record. McCoy comes up to the bridge and explains that tribbles are essentially born pregnant. “From my observations, it seems that they are bisexual and reproducing at will,” he says. I’m just gonna leave that there.

And when Kirk checks out one of the storage compartments… This happens.

Remembered when I mentioned slapstick before? Yeah.

Oh, but here’s the TWIST! McCoy comes running in to announce that if they want the tribbles to stop breeding, they just need to stop feeding them! (LOL!) But when he scans the tribbles, he discovers that Kirk is buried chest-deep in tribble corpses. Conclusion: Something is wrong with the grain. “I want to know what killed these tribbles!” Kirk declares. Like a boss.

Kirk gathers Cyrano Jones and the two Klingons with dialogue in this episode for a Columbo-esque confrontation over The Case of the Dead Tribbles. Cyrano’s brought some live tribbles with him to this party, and the Klingons ask that they be removed, but when the two redshirts on tribble duty pass by the Turtleneck’s mock turtleneck-wearing assistant Darvin, the tribbles freak out! Like they do when they see Klingons!

Through a lovely bit of tribble-assisted deduction, Kirk figures out that Darvin is a Klingon who surgically altered himself to look like a human (which I guess means he shaved off the goatee?). And then Kirk uses advanced tribble interrogation techniques (waving them around) to get Darvin to confess to poisoning the grain and to get the other Klingons to clear off the station. Oh, and Cyrano Jones’s punishment is that he has to clear the tribbles from the station, which will take him a few decades.

Meanwhile, a new shipment of of quadrotriticale is on its way to Sherman’s Planet (I know you were really invested in the agricultural welfare of Sherman’s Planet, Frank) and there are no more tribbles on the Enterprise. How’d they pull that off? Scotty transported all the tribbles into the Klingons’ engine room, “where they’ll be no tribble at all!” Everyone laughs! Those tribbles were likely butchered immediately by enraged Klingon engineers! Comedy!

I poke fun, but it’s wonderful. “Tribbles” is one of those episodes that makes it clear why Star Trek has survived in the public imagination so long — space battles are great, but what’s truly wonderful is watching a show where everyone really LIKES each other. A show that, in many ways, is about a family.

Posted on August 16, 2011, in All the Spoilers, TV and tagged I still like "DS9" better, spock = comedy genius, star trek, the trouble with tribbles, uss enterprise. Bookmark the permalink. 4 Comments.