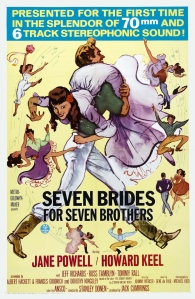 It’s been a really long time since I saw Seven Brides for Seven Brothers, which is to the best of my recollection the best-known musical of the classic cinema era to not star anyone the 21st century gives a crap about. (Yeah, that might be a little harsh towards Jane Powell and Howard Keel except — who?)

So prior to rewatching it for you, Frank, here are the two things I remembered about Seven Brides:

1) Cinema nerds passionate about aspect ratios would often cite the pan-and-scan cropping of this film as one of the greatest travesties of all time.

2) The first Catwoman is in it!

You know you’re off to a great start, by the way, when the movie’s credits include this note: “Based on the short story ‘The Sobbin’ Women.'” Which, yes, I understand is a reference to the story of the Rape of the Sabine Women, one of the film’s primary reference points — and thanks to Wikipedia, I know that the use of the word “rape” is much less violent and, well, rape-y than you might expect. But still. But still.

We open on this dude named Adam, who’s driving his wagon into an old-timey town from his house in the mountains to pick up supplies — and a wife. But he’s got no particular woman in mind; rather, he’s shopping for something along the lines of “a woman who’s not afraid of hard work.”

He thus wanders around town looking for that special someone, finally spotting a lady working at the local saloon, chopping wood and pushing around men. “Sassy!” he calls her. It’s kinda cute, I’ll give you that.

This movie’s guide to seducing wimmin:

1) Have a sweet beard.
2) Spy the lady of choice.
3) Sample her cooking to make sure she’s a keeper.
4) Propose whilst she milks a cow.
5) Shave sweet beard into a sweet ‘stache for the wedding.

It’s actually pretty effective! He makes the case for rushing to marriage based on the fact that he’s not going to be able to get down the mountain for another five months, and since our gal Millie, it turns out, hasn’t been too into the other fellas in town, she’s ready to take a chance on her now-mustachioed husband.

On the ride back to his cabin (aka Camp Bro), they actually seem to be having a pretty good time — by which I mean there’s some singing about bluebirds and being happy. And then they arrive, and she finds out that (as suggested by the title) she now has six brothers-in-law. For whom she is expected to cook, clean and care for.

Understandably, she is not thrilled about that — especially when the Bros prove to be distinctly uncivilized — and at dinner ends up flipping the table when they ignore her pleas for grace and/or table manners. I like Millie. At this stage, anyway.

Later that night, Millie calls Adam out on basically wanting a hired girl and not a wife, to which he says “kinda, yeah, but you got real purty eyes.” That first night, instead of boning him, she sings him a little song about how she believes in love. Which is probably almost as good as bedding your wife after a lifetime sequestered in the mountains with six other men.

The next morning, Millie shows some spunk and steals all of the boys’ clothes, refusing to feed them until they get cleaned up. Which they do! Well done, Millie.

Then she heads into town for supplies, and all the boys come along, and within five seconds of arriving in town they end up picking a fight with the locals.

This is, basically, because the brothers don’t know how to talk to girls — Millie, figuring out that her life gets easier the more brothers-in-law she can marry off, now sings a little song about how hunting down a girl is twice as tough as hunting down game, but totes worth it. I feel like that hunting metaphor might backfire down the line.

Oh, but first we have to go to a barn-raising, AKA the closest thing they have to a rager in… Huh. Not actually sure where or when this takes place, Frank. The old west, certainly, but an old west where mountainmen are comfortable wearing a wide variety of brightly colored shirts. Sure.

The barn-raising is the scene of what can only be described as one of the most epic dance battle sequences in American film. I’m completely serious about this. Step Up 3D ain’t got NOTHING on these seven bros facing off against the nicely dressed boys from town. You really just have to watch it:

See? So fucking epic. And the ladies from town are pretty impressed by the bros, but the barn-raising ends in fisticuffs and disaster, so at the end of the night the Bro family slinks back to lick their wounds.

And then Adam sings another song about how it’s cool to be in love, which he ends with “One woman’s pretty much like the next.” Millie hears this. For the record, Adam’s a bit of an ass.

And now it’s winter! And all the boys are sulking over how they’re in love and doomed to hang out in a snowy wasteland. By sulking, just to be clear, I mean singing. There’s a LOT of singing and dancing in this movie, Frank. It’s well executed, though, and for a bunch of guys living in the woods, they’re awfully good at axe ballet. 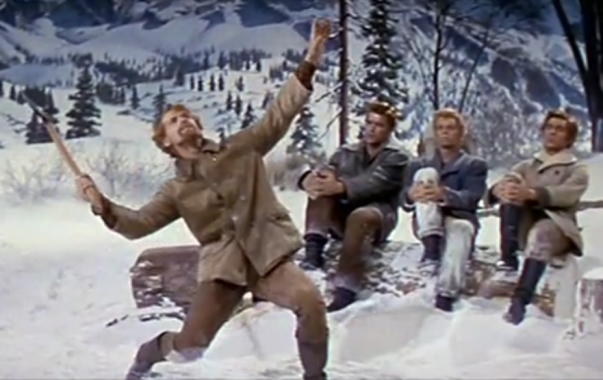 Adam makes the very wise point that there’s no reason for the guys to be moping over the girls they hung out with at one barn-raising, but Millie persuades him to give a shit about their feelings. Unfortunately, Adam’s version of giving a shit is to encourage his brothers to STEAL THE WOMEN, c.f. the Sabine Women. I am not kidding. “It’s what the Romans did. They went down and carried them off!” This is what history does in the wrong hands…

OH GOOD THERE’S A WHOLE SONG ABOUT IT’S TOTALLY OKAY TO ABDUCT WOMEN AGAINST THEIR WILL AND “MARRY” THEM BECAUSE “PLUTARCH SAYS.”

WOW. WOW. WOW. Let me just reprint some lyrics from this song here:

I’ll give this song this, Frank: It’s by far the most cheerful song about stripping women of their ability to make choices that I’ve ever had the pleasure of listening to.

The song leads to a delightful sequence of events where women get bags thrown over their heads and abducted. The kidnapped women struggle all the sleigh ride home, but alas, their menfolk are unable to save them, as the Bros have muffled their cries for help — until they can be timed to trigger an avalanche that seals off Camp Bro from the town, that is. There is something super-gross about that, on top of the level of super-gross already at play.

Fortunately, Millie’s back at Camp Bro, and she kicks all the fellas out of the house for this — including her husband, who she tells off so thoroughly that a feminist gal in 2012 can’t help but cheer. Adam decides to clear off to the trapping cabin (I guess the summer house?) and I ain’t crying no tears, I tell you what, because what a jerk.

From within the house, the girls proceed to torment the fellas over the course of the winter — initially deeply satisfying. Less satisfying: The way the girls end up swooning over the Bros as time passes, thinking about how they’re sleeping in the same beds that the boys used to sleep in and thinking about how awesome it’s gonna be to get married. There’s a big song and dance number about how being a June bride is the best kind of bride “because you’ll always be a bride”… Oh, man, it’s so nice living in a century where I’m allowed to think about things besides my marital status.

But lest you think there’s only one thing women can look forward to in this society, never fear Frank! Millie’s having a baby in spring! (I guess she and Adam got intimate at some point before the whole women-stealing thing? Nice.) And the spring comes just in time for some farm chore flirting between the Bros and their designated ladies. In case you were wondering, we’re on ten straight minutes of musical montages at this point. This one, at least, has a bunch of baby animals in it. ADORBS.

And then Millie has her baby. You never once see her pregnant, by the way, because the biological functions of women should always be hidden from outside society. But the baby appears to come out just fine — and eventually Adam decides to stop sulking up in the winter cabin and come check her out.

How this gets resolved? Oh, sweet jesus. Basically, all the (remember, unmarried) girls claim that Millie’s baby is their baby, and so it’s a six-way shotgun wedding! And I guess everyone’s happy. Except me, that is — I’m kind of sad there’s not another dance sequence.

This movie is not a hardship to watch — it’s full of badass dance sequences, and really, getting mad over the gender politics of a movie made math-is-hard decades ago is kind of a moot point. Plus, to be completely honest, the fact that Adam’s the one who comes crawling back to Millie is pretty cool.

Seven Brides for Seven Brothers, as long as you bear in mind the definition of “rape” in play, isn’t the most objectionable thing on Earth. After all, Frank, there are a lot of other things, that have been made a lot more recently, that are a lot more worse.

Posted on May 15, 2012, in All the Spoilers, Movies and tagged I do love a dance sequence, Seven Brides for Seven Brothers, sweet beards. Bookmark the permalink. 2 Comments.