← Open Thread: What Should Frank Be Told About in 2013?
Liz Tells Frank What Happened In “My Little Pony: Friendship Is Magic” →

Liz Tells Frank What Happened In “Les Miserables” (The Movie) 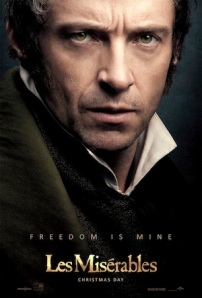 There are a lot of people in the world who really really fucking love Les Miserables. They do not include me. I don’t hate it — I just don’t have the innate deeply-born affection for it that its superfans do, probably because I’ve never really seen it until Tom Hooper’s brand-new film adaptation.

I mean, because I am a human being who was born during the 1980s, I am familiar with a number of its songs; in fact, when I was 12 years old, I auditioned for a musical by singing “Castle on a Cloud.” (And fuck yeah I still remember all the lyrics.)

But beyond that, and maybe reading the original Victor Hugo novel in high school (which it turns out I remember not in the slightest), sitting in the theater to watch the film was my first real exposure to “The Musical Phenomenon” (TM the movie posters).

What happens in Les Miserables? Frank, you didn’t technically ask (this entry was a special request from my friends Jay and Bronwen) but I’m happy to tell you anyway. Basically, in the early 1800s in France, this guy Jean Valjean stole some bread and got sent to jail for five years; he then breaks his parole because it turns out being a parolee in early 1800s France fucking sucks.

Fortunately, a very nice priest dude lets him steal some silver if he promises to be a better person, and Jean Valjean takes on a false identity so that eight years later, he can be a prosperous businessman and mayor of some small French town that doesn’t find it at all strange that their mayor didn’t exist until a few years ago.

So, aside from the lying-about-his-identity thing, he’s living his life honest — but then he’s not paying attention when one of his factory workers, a nice lady named Fantine, gets fired for having a secret child. And then Fantine, broke and desperate as hell, ends up selling her hair, teeth and eventually vagina for money to send to her daughter.

IT FUCKING SUCKS TO BE FANTINE. Jean Valjean figures this out pretty late in the game — like, “now the prostitute is dying of the tuburc and all I can really do for her is promise to take care of her kid” late in the game.

But he does commit to rescuing little Cosette from the thieving innkeepers who have been housing her — even though Inspector Javier, who’s obsessed with sending Jean Valjean back to jail because of law and order or whatever, is hot on his heels.

Jean and Cosette end up in Paris in hiding, and then eight years pass and Cosette grows up hot and the French Revolution 2.0 happens. Cosette does the fall-in-love-with-a-stranger-from-across-a-crowded-Parisian street thing, and the French revolutionary she eyefucks, a guy named Marius who seems fine, blows off Eponine, the daughter of those thieving innkeepers from before who’s in total unrequitedness with Marius. (The thieving innkeepers constantly show up for comic relief purposes, which becomes increasingly unnecessary.)

Heartbroken, Eponine binds her breasts and joins the French Revolution, which is rad, but then there’s a lot of shooting guns, and Eponine gets killed, which sucks — especially because I’d just kind of gotten on board with her level of bad-ass-ery. 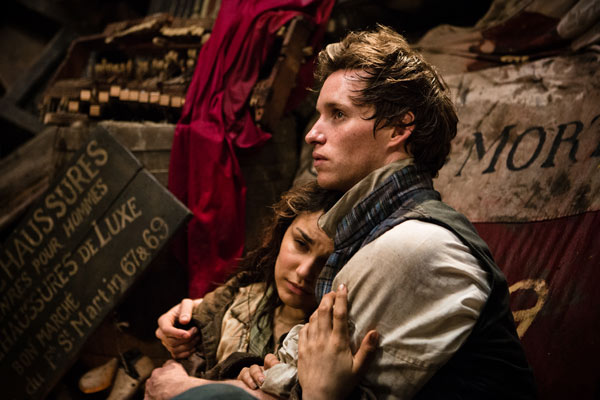 ALSO SUCKS TO BE EPONINE.

She dies cradled in Marius’s arms, Frank, and he sings to her “If I could heal your wounds with words of love” and I was like HOW ABOUT YOU TRY BANDAGING HER WOUNDS WITH BANDAGES. He doesn’t. She dies. Just so we’re clear.

Meanwhile, Inspector Javier gets captured by the revolutionaries but Jean is a nice guy so he lets Javier go. Then Javier jumps off a bridge because of shame or pride or something. I honestly can’t care that much.

Jean drags Marius through the sewers to escape the French non-revolutionaries, because Cosette loves him, and then Jean goes back into hiding while Marius and Cosette get married, but Marius and Cosette track him down just in time to watch him die — of old age, I guess? The ripe old age of 43. But it’s nice. Ghost Fatine sings to him. And then we do a big reprise of the big talkin’-bout-a-revolution number and all the people who were shot to death are just fine and THE END.

If any of this sounds dismissive, let me just say this: I did enjoy the film. There’s some fantastic ugly-cry-singing on display, and I’m on record already as being in favor of watching Hugh Jackman singing, and most of the rest of the cast was also great — let me join the chorus of folks, by the way, who want to see Anne Hathaway win an Oscar for playing Fantine.

I mean, every time Anne Hathaway appeared on screen, I was either crying or close to crying. I mean, for fuck’s sake, the way she sings “Don’t they know they’re making love to one already dead?” SADDEST WHORE SONG EVER. 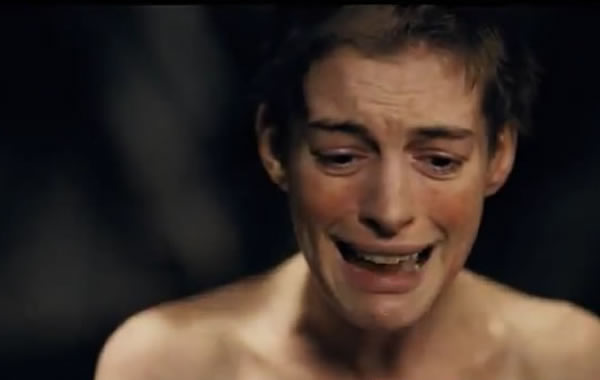 The very definition of sadface.

But ugh, Frank, it’s soooooooooooooo longggggggggggg. I mean, the part of this movie I found the most boring was the part where there was a fucking French Revolution — which might actually be a good sign? But still, SO MUCH FRENCH REVOLUTION, and that’s AFTER two hours of whores being sad and Hugh Jackman confessing.

I mean, Hugh Jackman is just CONSTANTLY confessing to shit. Hugh, you sang a whole song about how much prison sucks! If you don’t want to go back to prison, for god’s sake don’t confess to stuff!

Also, I had been warned in advance that this exchange of dialogue was going to happen:

But that didn’t make it any less ridiculous.

Oh, and that wasn’t even the film’s biggest moment of hilarity! Before I saw the film, I had thought about including a disclaimer in this entry along the lines of “I cannot tell the difference between good singing and amazing singing — so I won’t be making any judgments on how the cast performs.” But then Russell Crowe opened his mouth.

Honestly, I don’t understand why they felt this movie needed innkeeper comic relief — didn’t they see the part where Russell Crowe was singing? It’s not like he was bad, it’s just that everyone else around him was so much fucking better, and also he wasn’t very good.

Also it turns out I can’t take Russell Crowe seriously ever since finding out that the name of his band is 30 Odd Foot of Grunts. I’m just saying, if you’ve been out-performed by cast members from a CBS sitcom on a daytime talk show, maybe you should rethink some life choices.

Otherwise, I found Les Miserables for the most part compelling and interesting — interesting enough, at least, for me to want to see the stage show, should an opportunity present itself. If only to get why everyone is so into it. The movie gave me a taste, but now I want the full meal.

That might be an inappropriate thing to say about a movie where people are literally starving to death. But that’s metaphors for you.

← Open Thread: What Should Frank Be Told About in 2013?
Liz Tells Frank What Happened In “My Little Pony: Friendship Is Magic” →