Liz Tells Frank What Happened In the “Arrow” Pilot 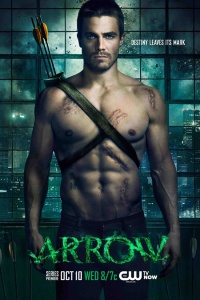 I come to you bitter and jaded, a woman who has survived the worst that DC Comics television adaptations have to offer.

I refer not just to the unaired Wonder Woman pilot, which, to its defense, was never technically thrust upon the world. I also refer to Birds of Prey, the failed-but-actually-aired attempt to adapt the Chuck Dixon/Gail Simone comic for the WB. I have been through the wars, Frank. I have seen beloved characters betrayed. So let’s see what the CW has done to Green Arrow!

The first scene, in which a guy on a desert island with a lot of hair (head and face) shoots an arrow to set off an explosion that alerts a passing fisherboat that he’s been shipwrecked — that at least feels like a thing that should happen if the main character of the show is called Green Arrow.

Why isn’t he allowed to be green? I REALLY DO NOT KNOW BUT IT IS CONFUSING AS FUCK.

I mean, the plot isn’t confusing so far — guy was on a boat, boat got shipwrecked, guy made it to an island, guy got rescued off an island after five years but is kinda fucked up about it. But does it feel like a comic book yet? NOPE.

So Act 1 of this pilot is largely devoted to getting our boy Oliver back on American soil and adjusted to things — stuck on an island, he missed out on some pop culture, which means that the show just flat-out spoils the plot of the Lost finale and then devotes some time to introducing Ollie’s family and friends.

Wait, Oliver’s younger sister’s nickname is Speedy? Pause for Wikipedia checking… NOPE, not the canonical characterization of Speedy, Green Arrow’s sidekick. Not that I should really be getting bent out of shape about it, Frank, given that THE CHARACTER’S NOT EVEN CALLED GREEN ARROW.

Arrow, so far? More an adaptation of Hamlet than a comic book where a dude shoots exploding arrows. This is because Oliver’s mom has married his father’s former business partner or something and now they’re running the family business. Spoiler alert, Frank: Oliver’s mom and new husband? THEY ARE UP TO SOME SHIT. 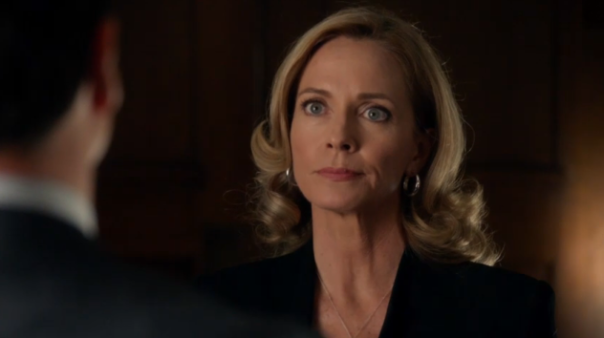 I like the part where Gertrude from “Hamlet” gets to be the bad-ass, let’s be clear.

Next, Oliver goes to visit his ex-girlfriend — well, I’m assuming she’s his ex because he was fucking her sister on the boat right before the boat sank. Sister is dead, their relationship is fucked, and Oliver, just after that, gets kidnapped by dudes in a van for reasons.

These dudes, however, do not know that they have kidnapped a ninja-parkour-doing dude, and so Oliver easily escapes and parkours and ninjas his way out of trouble. Notable moment of this sequence: He totally breaks a dude’s neck because “no one can know my secret.” Way to take this one dark, CW.

Somehow, all this gets pinned on some sort of “hooded man” who the police therefore begin hunting for — oh and of course Oliver’s ex’s father is totally a cop–

Here’s the really important question: WHEN IS THE SCENE WHERE HE DOES A BUNCH OF PULL-UPS HAPPEN?!? Asking for a friend. My friend Frank. He’s invested. And seriously, I mean, that was how the CW sold this show to its audience. It’s only fair that we have demands.

Post-kidnapping, Oliver gets a bodyguard. Said bodyguard is immediately terrible at his job. Which works out for us, because it’s time for PULL-UPS IN THE ABANDONED WAREHOUSE TIME!

Well, first he takes a few moments to turn said abandoned warehouse into his figurative Arrow-Cave, but then we GET DOWN TO SHIRTLESS PULL-UP BUSINESS. I haven’t been dating much lately, Frank. Please forgive me.

Wearing a shirt, Oliver reminds us that he is good at shooting arrows, and also at creating lists of dudes that he wants to destroy–

I JUST FIGURED IT OUT, FRANK!!!! Arrow is the hit ABC drama Revenge, but with a dude who shoots arrows! I can not emphasize enough how perfect this metaphor is.

The main plot of the episode, beyond all the set-up, has to do with some conspiracy with some guy over some business stuff — I guess he screwed over a bunch of poor people, which is bad. But I don’t really care because here how this rolls: Bad guy with money doing bad things gets taken down by good guy with money. BUT DON’T THINK OF IT AS BATMAN WITH ARROWS, SERIOUSLY DON’T DO THAT.

For the big action climax, Green Arrow has a big welcome back American party everyone disco dancing during which two important things happen. One, he has a Moment with his ex-ladyfriend who is trying to be nice, but he blows her off to play partyboy because he is TOTALLY NOT BATMAN NO SIRREE.

Also, there is this exchange of dialogue:

Ollie’s Best Friend Who I Suspect Has Secret Gay Feelings For Ollie: Now by my rough estimate, you have not had sex in 1,839 days. As your wingman, I highly recommend Carmen Golden.
Oliver: Which one is she?
OBFWISHSGFFO: The one that looks like the chick from Twilight?
Oliver Queen: What’s Twilight?
OBFWISHSGFFO: You’re so better off not knowing.

And I enjoyed it.

FIGHT FIGHT FIGHT CORPORATE CORRUPTION SOLVED! Oliver’s hood fell off! That’s not good! But then he escapes on a zip line! And makes it back to his fancy party just in time to keep the cops from knowing that he likes playing Robin Hood. And a magic hacking arrow Oliver fired in the bad corporate guy’s office ended up stealing all of the bad guy’s corporate moneys. So that’s good!

What’s sad is this flashback that happens to Oliver’s lifeboat following the shipwreck. Turns out, Oliver’s dad and another random guy also made it onto the lifeboat, but because they’re so isolated, only one person has any real chance of surviving. So Oliver’s dad TOTALLY MURDERS THAT RANDOM GUY and then SHOOTS HIMSELF IN THE HEAD so that Oliver can survive the shipwreck thing. THIS IS A HORRIFYING SCENE! I was not expecting it. And it made me sad. I can see why Oliver is sad! Seriously, I can’t emphasize enough how much that scene bummed me the fuck out.

But then we get back to the present, where ladyfriend is established as Dinah Lance, AKA (in theory) Black Canary, which I am down with. And also (remember that spoiler alert from before, Frank?) it turns out that Oliver’s mom is an evil mastermind type who was behind that whole kidnapping thing! Well. Good to know, I suppose.

So full of mysteries, so little time. How invested am I? I don’t know. I just know that I yearn for the Marvel brain trust, so devoted to making sure that every property it has under its control (AKA SORRY X-MEN AND SPIDER-MAN) fits into a clear continuity.

If I could detact this series totally from everything that’s come before, I wouldn’t think it the best thing I’d ever seen, but I probably would enjoy it more. But that’s because I’ve come to expect more from my superhero tales. Thanks to Marvel, I’ve come to demand that they make sense.

But I’ve heard good things about this show going forward, Frank, and if they’re going to do things like cast John Barrowman and Alex Kingston as recurring characters, then I might as well go ahead and give the full first season a chance down the line. Because I have a high level of patience for silly superhero fun. Especially when it is accompanied by shirtless pull-ups.

Posted on March 6, 2013, in All the Spoilers, TV and tagged Arrow, DC Comics, HE IS ACTUALLY CALLED GREEN ARROW, superheroes are super!, television pilots, the cw. Bookmark the permalink. 3 Comments.