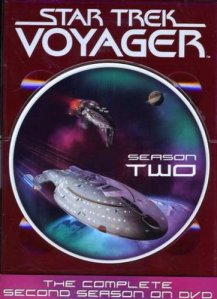 Hey, did you ask Santa for more advice on avoiding the worst of “Star Trek: Voyager”? Only took him six months, but he’s finally delivering — in the form of Whitney Bishop. She’s already done Season 1 — now it’s time for Season 2! Enjoy. –Liz

One of the first problems with Voyager‘s second season is that… well, parts of it weren’t intended to be in the second season at all. The first four episodes were filmed to be part of the first season, but they got moved over and that weirds a lot of the timing.

So this season is bumpy from the get-go, and it doesn’t get much smoother as it goes along.

1. “The 37’s”: Skip it. Okay, okay, watch it if Amelia Earhart really turns your airplane crank. But this is more of what I mean with the obnoxiously twentieth-century-US-centrism. If you were an alien and you could abduct anybody in the galaxy, would you go for the people living 70,000 light-years away? I thought not.

2. “Initiations”: Watch it. I swear, this isn’t just my fondness for Aron Eisenberg speaking. Kazon gang culture is interesting in no small part because the writers are obviously fighting the natural urge to go, Need a villain? Why not Klingons Lite (TM)?

3. “Projections”: Watch it. Sure, it’s a Doctor episode, and I love those. But if you have the opportunity to watch a Reginald Barclay episode and you pass it up, you basically have no soul. [Whitney, as usual, is correct. –Liz]

4. “Elogium”: Skip it. I mean, if you don’t mind a whole lot of heterosexuality (and I do mind it as an assumed default several centuries into the future, but that’s a rant for a different time), you do get to do some nice feral acting (and eating). But you can fast-forward to the last three minutes or so and get the gist while saving yourself having to view a lot of squirming CGI space sperm.

5. “Non Sequitur”: Skip it. I wish I could say you should watch an episode where Harry has a sexy girlfriend and gets in fistfights. But you probably shouldn’t.

6. “Twisted”: Skip it. Unless you’re just super-duper into people talking about feelings while facing death and antics with the people in Tom’s fake French cafe. (Sidebar rant: This is a ship working on very limited resources, to the point where they’ve had to resort to replicator rationing. So tell me again where they get all the juice to power their magical dream room?) [Same place they get the shuttlecraft. — Liz]

7. “Parturition”: Skip it. You can go your whole life without watching Neelix and Tom co-parent a wet baby puppet.

8. “Persistence of Vision”: Skip it. If you’ve seen one bunch of aliens that make the Voyager crew think they’re seeing things that aren’t really there, you’ve seen ’em all.

9. “Tattoo”: Watch it. Because you’re curious about Chakotay’s face tattoo and because his body double has a nice ass, and not because you actually get behind the idea that all the indigenous peoples of North America were super-specially contacted by aliens from the other side of the galaxy because said aliens just really liked how much they loved trees. [Wait, you see full-on dude booty? “Voyager” really is for the ladies. –Liz]

10. “Cold Fire”: Watch it. It calls back to the first episode (with a super-awkward bit of voiceover exposition) and Kes gets to do some cool stuff. And scream a lot. She definitely screams a lot.

11. “Maneuvers”: Watch it. Because Very Special Surgically Altered Cardassian is back. (Sidebar #2: One of the unfortunate consequences of making a disobedient half-Maquis crew is that Janeway basically has to spend half of every episode scolding someone for not following the rules. First female captain and you make her a nag. Way to go, show.)

12. “Resistance”: Skip it. Another day, another planet whose resistance to an evil government is helped along by our courageous heroes’ fucking up.

14. “Alliances”: Watch it. Related to the larger Kazon plot. But seriously, after a year and a half of this, Janeway, why would you trust anyone’s ostensibly good intentions?

15. “Threshold”: Watch it. The terribleness of this episode is legendary. General consensus holds that this is a serious contender for the dubious honor of being the worst episode of any Star Trek ever made. Your mind will boggle at how bad it is. It makes the baby Darwin cry. You owe it to yourself not to miss it. Spoilers: Warp 10 is made entirely of Smile Dip. ONWARD, AOSHIMA! (Better watch it: all of Gravity Falls.) [Whitney is NOT LYING. This episode is a classic in all the best/worst ways. –Liz]

16. “Meld”: Watch it. Brad Dourif is the best. Tuvok is the other best. It’s a hell of a combination. …Honestly, this is the first episode I’ve actually liked, not just appreciated as part of the larger story that’s going on. I guess that’s Brad Dourif for you.

17. “Dreadnought”: Watch it. Nothing big or exciting, but still a solid B’Elanna-focused episode.

18. “Death Wish”: Skip it. Q episodes are pretty hit-or-miss. On Next Generation, they (mostly) hit. On Voyager, they pretty much do nothing but miss. This isn’t a bad episode at all, but it’s just completely out of place with the rest of the series. Not to mention how here again comes the morality trowel. [I vaguely recall liking this episode? But I’ve been wrong about things before. –Liz]

19. “Lifesigns”: Skip it. Romance is boring, even when the Doctor is the one doing the admittedly sweet romancing. (The romancee will show up again later, but only minorly.) The B-story is important, but you can infer what happened in it from what gets covered in….

20. “Investigations”: Watch it. Plot-relevant. It’s hard to make a whodunnit interesting when the audience already knows who did dun it, but this one manages to do it.

21. “Deadlock”: Watch it. The resolution should annoy me, on account of how lame it is in theory, but it manages to finesse it so that it’s actually a brave solution. Plus, you know, BABY DRAMA. Two Janeways: always better than one!

22. “Innocence”: Skip it. Yet another lengthy cultural misundertanding, this time with cute children. Not bad, but not worth the effort. Though there is the bit where Tuvok sings, and that’s sweet.

23. “The Thaw”: Skip it. Not even the Doctor’s excellent moments could save that weirdness. The concept is terrifying, sure, but if you’re going to do ‘trapped in your sleeping mind by a fear demon,’ go Elm Street or go home. Best moment of the episode: when the soundtrack played a bippy carnival piece, but the subtitles identified it as Wagner’s Die Walküre.

24. “Tuvix”: Skip it. Okay, says the show, I know you said after Next Generation that if you never saw another wacky transporter mishap it would be too soon, but … you didn’t really mean that, did you? You did? Well, what if we made it end in making some members of the crew accessories to murder, giving a ten-second resolution, and never speaking of it again? (I mean, the guy playing Tuvix does a fantastic job, but … still.)

25. “Resolutions”: Watch it. Watching Janeway and Chakotay bounce off one another is pretty sexy. I mean compelling. It’s pretty compelling. Definitely not sexy. Don’t know what you’re talking about. …And they’re damn lucky I already kind of tension-ship it, because otherwise I might be irritated by the vague implication that any man and any woman stranded on a planet together will get their bone on. But no, those two are already hot for one another (and can you blame them?), so this is just a nice context in which they have to deal with it. [I think this is the one with the sexy bathtub scene! It is pretty sexy. –Liz]

So that’s 13 skip, 12 watch, and 1 watch ironically. Pretty much what we’ve come to expect.

…Okay, so I should explain some of those ‘skip it’ ratings. Some of the episodes that I recommend skipping aren’t bad at all, nor are they offensive. The main problem they have is the morality troweling I mentioned last time — the dilemmas are great, but then people spend a whole lot of time talking and talking about them. These first two seasons of Voyager are very ‘talky’ in that when the going gets philosophical, people don’t just speak, they give speeches. This bugs the heck out of me even when the actors can make it sound like something people would actually say, and a lot of Voyager‘s actors, bless them, just can’t quite pull it off.

Not only do I accept that there’s a certain theatrical quality to all Star Trek, it’s actually something I love about it; I mean, if you can’t hitch your wagon to a starship that’s being driven by a bunch of Klingons who love Shakespeare, you’d probably be happier somewhere else. But theatrical doesn’t have to mean ham-fisted or explained to death. “Deadlock” is good because its major morality conversation happens when Janeway is talking to herself and can therefore skip all the garbage she already knows she knows. “The Thaw” finally chokes and dies when Janeway has to give a lecture on the nature of fear to a not-very-scary clown.

All of which is to say: If you’re actually playing along at home, ‘skip it’ doesn’t necessarily mean ‘avoid it like the plague’. I’ll tell you if (read: when) we get there.

I should also note that season three starts getting into episodes I’ve never seen before. I’m following along with Memory Alpha, which is nice for perspective, though, especially in terms of knowing what will and won’t show up again later. Of course, most things don’t show up again later, no matter how important they are (or should be). But I’ll save that grousing for the third-season installment.

Whitney Bishop is editor-in-chief of Shousetsu Bang*Bang. She is also — in case you weren’t paying attention — the best.