As a young lass, I’d always feel profoundly lonely when I would turn to television in search of a character to identify with and came up empty. I mean, as a white woman, things coulda been a lot worse for me. But when I was growing up, my hope for evidence that not fitting in wasn’t a terminal condition was filled with frustrations.

The one major exception: The animated series Daria, which ran from 1997 to 2001 and, even today, is a balm for my soul.

I like to think of Daria as MTV’s apology to women for that whole Beavis and Butthead thing: Ostensibly a spin-off of B&B, the show featured a young woman “too smart and too sensitive to live in a world like ours, at a time like this,” struggling with not fitting into her new perfect suburban high school — and her younger sister Quinn, a perfect teen specimen, who did.

However, Daria’s intelligence proves to be a valuable weapon in the War Against Average Adolescence, and she’s also fortunate enough to find a kindred spirit in best friend Jane, a droll artist with a hot older brother in a band. Oh, Trent, you beautiful half-asleep surprisingly-crushable fantasy object (for Daria, at least).

Given the fact that Daria aired on MTV — you know, what the cool kids watched in the ’90s, for the music videos — its celebration of freaks and geeks and satire of teen culture is in retrospect impressively subversive. Topics Daria tackled included:

I’ve been rewatching the show on DVD while pushing through repetitive tasks (like, for example, the sexy new spoiler warnings that appear in the WordPress template! Aren’t they rad, Frank?) and thoroughly enjoying the nostalgia trip — while there’s something timeless about two misfit girls finding their place in the universe, much of Daria‘s charm lies in its super-90s roots.

There were some truly terrible episodes of this show, let’s be clear — it’s been over 10 years since I really dug into Daria, but when I hit the one where all the holidays are people and Daria has to go to Holiday Island or something to save Guy Fawkes Day or something (NOT MAKING THIS UP), it triggered a wave of PTSD so intense that I almost instantly skipped past it.

Also, there is a musical episode. It is conceptually a cool idea (creator Glenn Eichler beat Joss Whedon to the punch by several years!) but it is not a good musical.

Those episodes, as well as a general decline in writing quality, were a factor in why I stopped watching the show a few seasons into its run. But the real issue was Tom.

Tom was a guy that Jane started dating first, and then he and Daria kissed, and there was a lot of drama but it eventually ended with Daria and Tom dating, and Daria and Jane eventually making amends but with no small amount of awkward resentment. 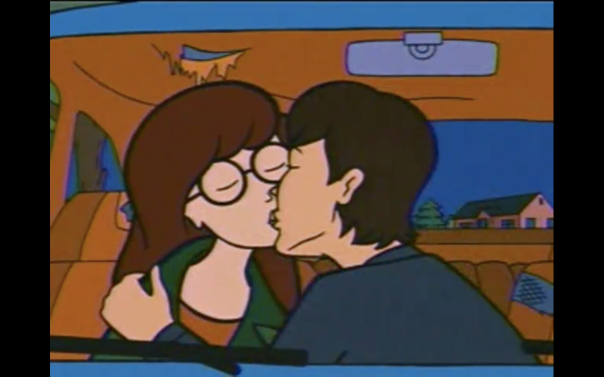 For serious, the blog I found this screencap on was entitled “DAMMIT DARIA.”

Frank, let’s just put it like this — I was a bit of a late bloomer. And high school me had no ability to engage with this stuff. Daria with a boyfriend just felt WRONG. Especially because Daria still had a lot to figure out.

I wasn’t actually Daria in high school, technically. One of my best friends not only had the look — brown hair, glasses, a monotone, a strong dislike of being a joiner — but the perky younger sister. So she got to be Daria, and because I was slightly more upbeat and outgoing (relatively, at least), I was Jane to her Daria, and content with that.

Of course, I wasn’t a picture perfect Jane, because of how I’m not a cartoon character — or a character at all. None of us are; we’re complex human beings who don’t fit into boxes, who are a little bit of this and that. I am not an equation: Fred from Angel plus Ben Wyatt from Parks and Recreation. I am just plain ol’ me.

That said, when plain ol’ me turns on the television and recognizes something of myself in a line of dialogue, a random character moment… Well, there’s no denying. It’s a comfort.