SPECIAL TREAT! Eric Miller (yes, of the Los Altos Millers, AKA my brother) recently played a video game! He found it a bit traumatic! So his solution: To tell me what happened in it. In enough detail to justify three whole installments! Not to mention a whole bunch of cat videos. 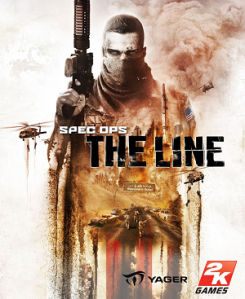 The question “Are Video Games Art” has become, thankfully, a dying question. One film buff, after asking himself that question at the start of a video in giant, bold letters, simply responded “Of course they are, that’s not even in question”. There will always be naysayers, of course, but the gamers of the world are starting to tune them out, because there’s a more interesting question in mind: “What kind of art are video games?”

The medium is everything in art. The finest movie adaptation of Lord of the Rings keeps the soul of the original, but changes most everything else in an effort to keep the three films under 20 hours. Stories you can tell over a 26 episode season are impossible to translate to a 2.5 hour movie, and the ability to frame a shot, cut it, take multiple takes and add in CGI can give film a splendor and weight that even the grandest opera could never hope to achieve. Every medium has its own upsides and downsides based on its mechanics, and the skilled creators have to find out how to enhance the strengths and minimize the weaknesses to create their work of art.

And that’s the reason why video games have gotten the short stick for so long. Too many try to tell a cinematic story, which means trying to take something that worked in a movie and cram it into a different medium with different rules. Somehow, this doesn’t seem to work as well, because it takes time, is TAKING time to figure out how this medium really works.

Needless to say, this is not exactly a cheerful game. Actually, it’d be more honest to say that it is the polar opposite of cheerful. Cheer and this game do not belong in the same sentence. I’ll try to include kitten breaks after the heavy bits.

In Spec Ops: The Line, you play as Captain Walker (voiced by Nolan North, whom you may know from half of the video games ever made), leading a 3 man Spec Ops team into a Dubai that’s been hit by the mother of all Sandstorms. You see, the Elite of Dubai saw the sandstorm coming and lied to the poor about the severity before legging it. A legendary soldier, Colonel Konrad, led his battalion, the Damned 33rd, into the city to help with the relief effort, and then ignored orders to leave the city once the Sandstorm decided it liked the scenery and stuck around.

Yes, they named the replacement for Kurtz after the writer of Heart of Darkness. Love the subtlety!

Your squad in the game is two other people, the stoic and serious Lt. Adams and the cheerful and wisecracking S.Sg Lugo, and they’re a pretty solid comedy duo, the comic relief and the straight man, well paired with the heroic leader Captain Walker, going into Dubai to find out what’s taking Konrad so long, and report back what they find.

What could possibly go wrong?

Of course, things go south pretty quickly (otherwise it’d be a pretty short game). You first start off fighting the locals, insurgents speaking Farsi and clearly not liking Americans much, and after a lot of fighting…

Third person shooter, after all

…you find out a bit more about what happened. Konrad attempted to lead the people of Dubai out of the city to safety, but they couldn’t make it through the sandstorms, and had to return to the ruins in order to not get everyone killed. Of course, the soldiers put themselves in charge, because clearly the foreigners with guns should be in charge of things, declaring martial law to keep the peace. The locals apparently didn’t like that, and some of them started fighting back against the Damned 33rd.

Job’s done, right? You know what’s going on here, time to make your way back home and report in? Well, no, because Captain Walker knew Konrad from Afghanistan. The man saved Walker’s life even, and he wants to find out why all this is happening… so the party keeps moving forward. Everything’s going fine until they run into the Damned 33rd, who think that Walker and Co. are the enemy, and open fire, and you have to fire back or die, and thus end up mowing down a few dozen American soldiers, as well as trapping a bunch more under a mountain of sand.

But its alright! These are clearly bad American soldiers, because they’ve been taking the civilians away by force. After this, you make contact with some CIA agents that have been rallying the locals against Konrad, who want to rescue them, put a stop to Konrad’s abuses of power and all that jazz. Walker (and you) want to help out, partly to rescue the locals from the Damned 33rd but also to find out exactly what Konrad’s been doing. Unfortunately, because people keep shooting at you… 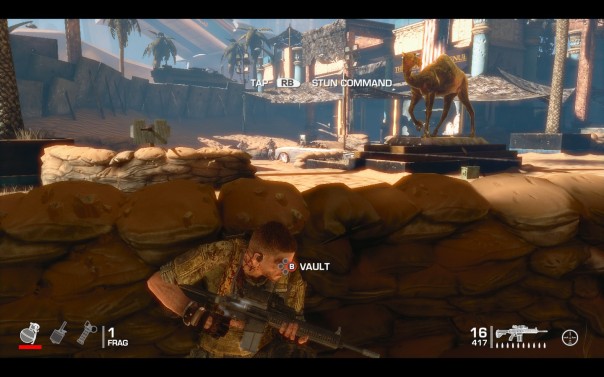 Still a shooter game, so shooting!

…you’re not exactly able to confer with the lead CIA agent until he’s kinda dead. Still, he had a plan: A map you find on his dead body shows that he was planning on assaulting The Gate, which is nearby, and you should finish what this heroic CIA agent gave his life for. After all, it can’t be too well def- 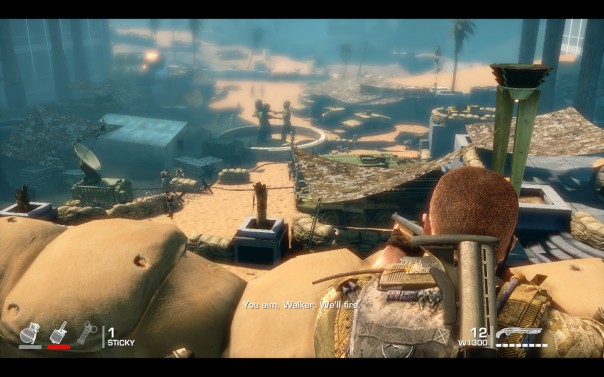 …maybe we can warm up on something a bit smaller? Like a dozen tanks?

Still, all is not lost. Nearby is a mortar, with plenty of White Phosphorous rounds to use. You had run into them a bit earlier, actually, which is quite nice for those that don’t know what it is. White Phosphorous is a material that burns really, really quickly and readily, used in tracer rounds, smoke grenades, and can be combined with explosives as a sort of fire bomb, burning at around 5,000 degrees (Fahrenheit, not that it matters much), sticking to the skin, giving off a toxic smoke and generally not a very nice thing to be hit with.

With the help of an airborne camera you can deploy for spotting, you’ll be able to locate the enemy soldiers and take them down thanks to the unquenchable flames of White Phosphorous!

“That must be their reserves! Fire away!”

It’s a pretty simple sequence, really, reminiscent of some of the AC-130 Gunship missions in the Call of Duty and Battlefield series. Really, the only difference is that you get to walk through the battlefield- 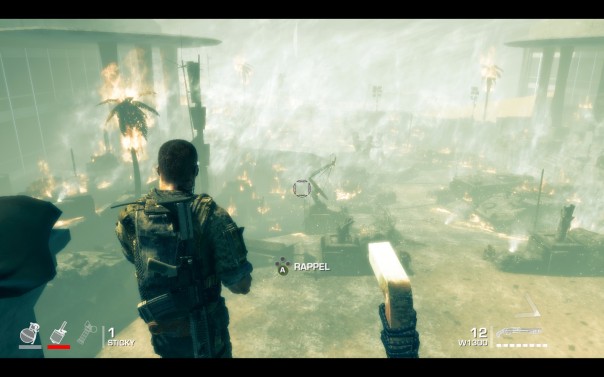 …and see the results of your…

…I think I’m going to be sick…

…heroic actions. Still, you eliminated the enemy, and you’re well on your way to finding out where the civilians are! Look, one of them is even talking! Saying… they were only trying to help… what could-

…we were trying to save these people…

Right, so, you’ve killed the people you were trying to rescue, you killed a few hundred American soldiers (albeit renegade ones), and this is only a third of the way into the game.

Now, Liz, you know me. I’m a pretty mellow guy, nice, gentle, kind… those captions? That’s basically what I was thinking. That last section? You were supposed to be aiming for the tank on the screen, not the blips. I aimed for the blips. Captain Walker led me there, sure. But I took the shot, and never questioned it until after I saw the results of my actions.

Eric Miller is a video game nerd who’s somehow managed to turn a hobby of playing video games into a professional career, the poor bastard. He also occasionally blogs at Beyond the Polygons.