Liz Tells Frank What Happened In “How I Met Your Mother” 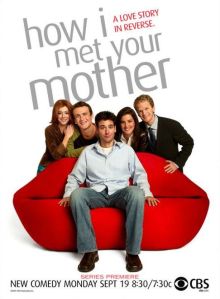 So it’s been a little while — sorry about that. There are a number of reasons, most of which boil down to “I really am going to tell you about After Earth out of revenge for it NEARLY KILLING ME the first time I tried oh god that movie’s bad.”

But someonething I loved left us forever this week, and I’ve been waiting for years to tell you about it. Once upon a time, Frank, this guy named Ted made his kids listen to the story of how he met their mother. It only took NINE SEASONS, Frank, but tonight that story came to a close.

And look, I could get into a lot of the details about this epic journey through the mid-20s to mid-30s years of a group of attractive white Manhattanites. I mean, just for starters, Ted’s many failed relationships, the incredibly loving marriage of his best friends Lily and Marshall, their womanizing buddy Barney’s love of manipulating women into casual sex, Ted’s long-time crush Robin’s pursuit of success as an on-air journalist, Lily’s failed art career, Marshall’s struggles as a corporate lawyer, Ted’s architectural obsession with the Empire State Building, Lily’s credit card debt, Robin’s secret past as a Canadian teen pop star, Barney’s black half-brother, Marshall’s obsession with puns, that time Ted and Barney licked the Liberty Bell, the Slap Bet…

The mother of Ted’s children is a nice young lady named Tracy, who plays the bass and studied economics so she could write books about ending world hunger. We first see her at the end of Season 8, but we do not learn her actual name until nearly the end of the series finale. Frank, I bet you’re saying to yourself, “Wow, not knowing the Mother’s name sounds like the sort of cutesy detail that would drive viewers totally insane by Season 9” and YOU MIGHT BE RIGHT ABOUT THAT.

What brings Ted and Tracy together? Well, when commitment-phobic Robin and womanizing Barney (yes, a couple who don’t seem like they’re destined to work long term) fall in love and decide to get married, they need a last-minute wedding band. Through seasons worth of coincidence fate (mostly involving that bitchy girl from The O.C.), Tracy’s band is booked to play Robin and Barney’s wedding reception in Farhampton. I’m not from the area, but I’m guessing it’s like the Hamptons, but farther.

Nearly every one of Ted’s friends meet Tracy through events related to the wedding, but Ted’s first glance of her is on the stage at the wedding reception. Tracy and Ted don’t officially meet until Ted, on his way out of town, sees her at the train station — they have near-instant chemistry, he decides to cancel his plans to move to Chicago and calls her the next day to ask her out. 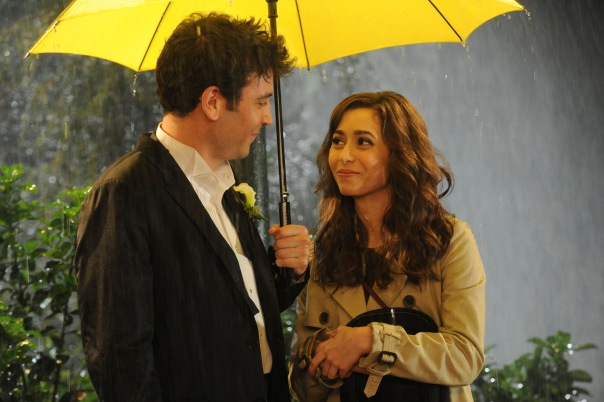 SO CUTE WHAT COULD POSSIBLY GO WRONG?!?

In what feels like less than 30 minutes (of screen time) they fall in love, move to the suburbs, have two children, and get married (in that order). It’s really sweet! They seem great!

Then she “gets sick,” as it’s put, and she DIES in the year 2024, leaving behind two young kids and an older Ted who for some reason always sounds like Bob Saget whenever you don’t see him on camera. Just your typical normal SITCOM FUN.

Ah, but here’s the twist! So Ted has been telling the kids the story of how he met Tracy (god, Frank, it’s so nice to be able to call her by a name!) in the year 2030. Mom’s been dead for six years. Meanwhile, Barney and Robin…

Oh, but TWIST! So three years into their marriage, Barney and Robin got divorced, and then Robin became a super-famous TV reporter, and she and Ted have stayed vaguely close. So Ted’s kids call out Ted on the fact that he’s been telling them this incredibly long story about how he met their mother, but mathematically only about one-ninth of it (at best) actually involved our good friend Tracy.

Most of it REALLY involved “our Aunt Robin,” and the entire point of this entire series has been Future Ted subconsciously asking his kids’ permission to try to date her. 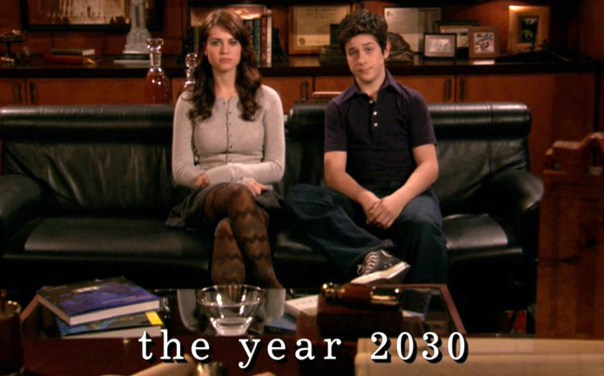 Fun fact: They shot the very last scene right after the second season of HIMYM, which among other things left The Daughter free to go kick ass on the CW’s “Nikita.” That’s a fun show, Frank! If you click this photo, I’ll tell you more about it.

Ted denies this for like two seconds (because holy shit we’re at 0:58 or something on the DVR at this point), then goes to Robin’s apartment, in a scene echoing one right from the pilot, with an in-joke from said pilot (a blue french horn/Smurf penis, if you must know).

It’s a big romantic gesture, the type he’s been guilty of for 208 episodes, and she smiles down at him, and title card comes up: “How I Met Your Mother.”

Frank, we’re friends, I’m a stupid girl, I’ve watched nine stupid seasons of this show, I’m not going to lie to you. I cried.

I mean, I have thoughts. And concerns. And critiques. Of course I do. Of course the entire fucking internet does. After all, it’s a series finale. Finales are what ruin shows.

(Fun game for the comments, if you’ve read this far: NAME A SERIES FINALE THAT’S PERFECT. For the record, somewhere on the Internet I saw that Jason Segel already picked Bob, so you can’t pick that one.)

My primary problem, I’ll admit to you while the tears dry on my face, is that I really got to like The Mother dammit I mean Tracy she has a damn name now she deserves to be called by it. While never revealing her on screen for a good eight years, during that time the HIMYM writers did a great job of establishing her as a great fit for Ted, with matching personalities and goofy hobbies. (“Re-NAY-sannce Faire!”)

Then, in Season 9, Cristin Milioti actually shows up and interacts with human beings and inanimate objects! And she’s so sweet and funny and silly and likable that when her likely death became clear to the cheap seats (yeah Frank, I wrote that piece, I’m not above a little self-promo here and there), I got a little depressed.

I got even more depressed when it turned out that Tracy dies young because HIMYM‘s end game has always and forever been to reunite Ted and Robin in the end.

Let’s be clear, I don’t HATE that decision. But here are my two problems with it: Problem One, Robin’s arc during the finale goes as follows — gets married, divorces Barney in part because she’s too devoted on her globe-trotting career and becomes very distant to her friends. Seriously, Ted says she’s like a Sasquatch at one point, and then Marshall corrects him to say that she’s actually like a Yeti, because she’s “cold.”

NOT GONNA READ INTO TWO MALE CHARACTERS CALLING A FEMALE CHARACTER COLD BECAUSE SHE’S BECOME SUPER-DEVOTED TO HER CAREER, FRANK, JUST NOT GONNA DO IT, I SWEAR TO HUGH JACKMAN.

She does show up for Ted’s wedding, and then I guess at some point she moves back permanently to New York? Because in that last scene with Ted’s kids, they seem to know her pretty well, like, she’s coming over for dinner occasionally? Oh, and in the very last scene we see her in a New York apartment with five dogs. Maybe she has a really great dog-walker…

Let’s just say, Frank, this development could have used a bit more development.

Problem Two! One thing the show always handled well was the concept that there are just relationships which don’t work out, no matter how much people might love each other. There’s even an entire episode of Season 9 devoted to Ted letting go of his love for Robin, thus enabling him to wind up with Tracy; it is mature and adult and the fact that the ending seems to totally undercut it…

I mean, the counter-argument is this: What’s more mature and adult than a second marriage? The acknowledgement that love takes many shapes and forms, that some people just need to find their time, is something you don’t necessarily get too often from our increasingly-owned-by-Disney pop culture.

Expecting the fairy tale of falling in love with a handsome prince(ss) and living happily ever after until you die Notebook-style in each other’s arms (oh, by the way, spoilers for The Notebook)? That’s not only unrealistic, but at times downright destructive.

How I Met Your Mother, for all its flaws, never played on the expectations of the fairy tale. I guess, that is, until Sir Ted stood one more time below the turret window of Fair Maiden Robin, carrying a favor and requesting her heart.

All that said, I suppose the real question is this: Now that we know who the Mother is (and the new double meaning of the title!), am I disappointed?

To be honest — not really. After surviving The X-Files as a lass, I’ve become skilled at picking my battles with television shows, and more importantly I’ve become someone who’s learned to savor the details.

Details in general, I’ve come to find, are where I fall in love, and HIMYM was rich with those — from its casting to its long-running in-jokes to its bold experiments with form, it was a show that took chances on a number of levels. And I’ll always love and respect it for that.

Also, you know what’s interesting? Tonight, watching the finale with my current roommate, I found myself missing my old roommate Paul– Frank! How appropriate to remember him now! Paul is how WE met!

Paul is still a friend, but while we were roommates we regularly watched the golden years of this show together, and I’d have a lot of fun with him pinpointing references to previous episodes and trying to spot hidden pregnancies. I don’t know if Paul still watches, but watching “Last Forever” made me nostalgic for watching How I Met Your Mother with him.

Because that’s the thing about moving from young adulthood to true grown-up-dom, something I think HIMYM, in the end, managed to capture better than any show that’s come before. It’s a loose, weird time of your life. You make choices, you make mistakes, you make memories, you make friendships.

And you may leave those things behind in the end. But they never leave you, really.

Want to know what episodes of “HIMYM” are definitely worth skipping? Liz Tells Frank has a guide for that.