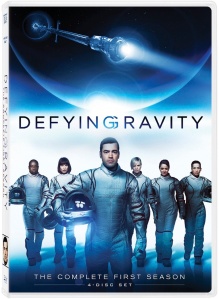 This weekend, I was going through the ol’ LTF archives, and you would not believe what I found: A half-written entry from 2009 about the short-lived series Defying Gravity, better known as the very-diverse-and-weird-Canadian-Grey’s Anatomy-in-space! Here is literally how my post began:

Defying Gravity is a tricky show, because you look at how four entire episodes of this wacky soap opera set in space have already aired, and you’re like, oh, COME ON, no way this show has really lasted that long on a major network (ABC, if you’re curious). But they are sort of cheating, because the first two episodes aired together as an uber-pilot, meaning that it’s survived three whole weeks in the deadest time of year, and looks likely to at least make it to week 5…

It actually made it to Episode 8. Which, Frank, is kind of in-fucking-credible. The more I describe this show, the more you’ll agree. END_OF_DOCUMENT_TOKEN_TO_BE_REPLACED