‘Twas a temperate November evening last year that brought you, I and a wonderful live studio audience together so that the mysteries and layers of Zack Snyder’s “Sucker Punch” could be peeled back.

What did we learn about? Oh, just multiple realities, multiple attempted rape and some of the stupidest character names ever. It was a magical evening, and now those who weren’t there can get a taste of the magic, thanks to YouTube and podcasts!

And audio-only version available via iTunes (eventually) or below (right now)!

Huge thanks to our fabulous studio audience, Andrew Deutsch and the fine folk of Nerdstrong in North Hollywood for hosting, official bell-masters Aimee and Toni, live-tweeter Margaret Dunlap and Barrett Garese and Laurel Vail for additional production assistance. Plus, a very very special thanks to introducer and producer David Nett!

Do you want to be cool like them? Well, the next Liz Tells Frank: Live is COMING RIGHT THE HELL UP. Specifically, January 23 in North Hollywood. Even more specifically: “50 Shades of Grey.” Details and (free!) tickets here. (Inner goddess, save me.)

Posted in All the Spoilers, LIVE, Movies, Podcasts, Spoiler Alert!

Where are you gonna be Friday, November 14th? Same place I’m gonna be — in a world of pain. 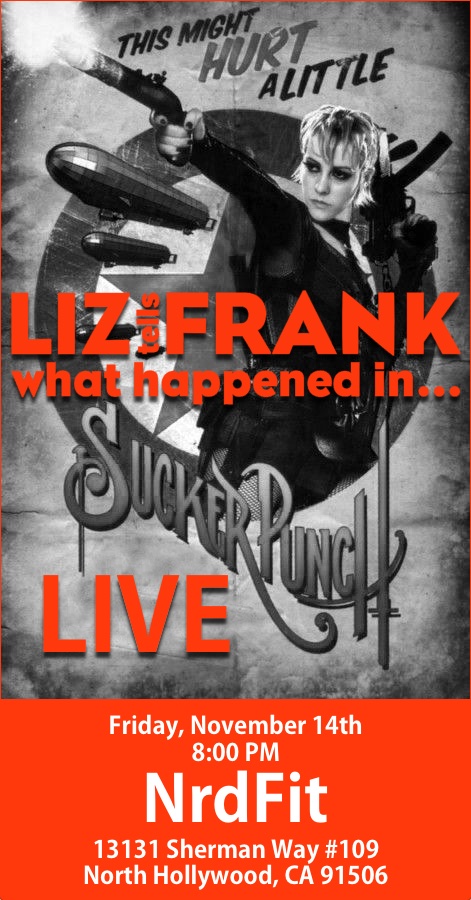 It’s happening. It’s in North Hollywood. It’s open to the public. It’s Sucker Punch, easily one of the dumbest movies ever, and thus ripe for the Liz Tells Frank Live treatment.

Info available here on Eventbrite or on Facebook. Made possible by the wonderful gentlemen of Nrdfit.

Like the Sucker Punch trailer promises, Frank — you will not be prepared. 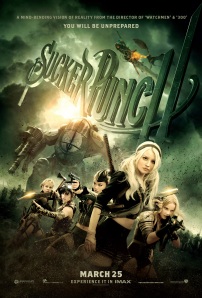 About two months ago, it got programmed into my brain that I wanted to see Sucker Punch, Zach Snyder’s “first original film” — in part because I’m a sucker for anything that might promise to be a girl power epic, and in part because I have a strange residual fondness for 300. (Not entirely because of this, but, yeah.) Combine that residual goodwill with the fact that American film is currently experiencing a drought of original premises and I like to support the ones that do make it into theaters, and you end up with me giving Zack Snyder my money on Sunday night.

Let’s end the mystery right here, Frank — if the movie had been great, I wouldn’t be writing this, and this installment wouldn’t be filled with SPOILERS. Read with caution.

Sucker Punch starts off by introducing a young girl only known as Baby Doll, who gets sent to a mental asylum by her evil stepfather after the death of her mother. (This movie does not deal in subtleties.) In the mental institution, she meets a pack of girls with whom she teams up for an escape attempt — because in five days, thanks to her stepfather bribing an orderly, she’s getting lobotomized.