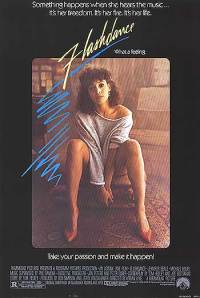 One of the fascinating things about doing this blog is that I can never properly predict what gaps might need filling in your pop culture consciousness. For example, I know you’ve seen Dirty Dancing and Center Stage — but you haven’t seen Flashdance? Frank, what the hell.

Flashdance is worth knowing about for many reasons, but the most important might be that it launched the following things: a rage for shoulder-baring sweatshirts, the epic producing partnership between Jerry Bruckheimer and Don Simpson and the writing career of Joe Eszterhas, one of the geniuses behind Showgirls. That’s right — without Flashdance, there is no Showgirls and the world is a… Different place, definitely. Better? Worse? Who knows. I’m just saying, different.

Flashdance opens with our lady hero, spunky 18-year-old Alex, stopping to pet a cat while biking to work. What does she do at work? Holy shit, she’s a welder! She welds things! She is in a MAN’S WORLD, which you know because there are sparks flying and machines doing machine stuff and all that, and because this film is a study in contrasts, you’re damn right Alex whips off her welding helmet for a big ol’ toss of her hair. (If I had that much hair, I would do that ALL THE TIME. I am incredibly jealous of her hair.)

Then, because Flashdance is nothing but a subtle study in contrasts, we immediately cut to the club Alex also works at. I say club because… Well, it’s quasi-technically a strip club, as the ladies wear progressively fewer clothes as their routines progress, but a) they never go topless and b) it’s the most artsy, high-brow not-quite-a-strip club ever. I am not going to bother describing these routines to you, Frank — only video can truly capture the magic.

Fun fact: According to IMDB, this movie was inspired by a trip to a Toronto strip club. Which in theory makes sense, except that I have NEVER been to a strip club that has dance numbers like this. My new roommate Jason, who’s watching with me, points out that these are the sorts of routines that drag queens do. I resolve to attend more drag shows.

In the audience watching this is Alex’s boss at the welder-plant-factory place, who I’ll just call The Boss because he’s kind of weird and gross and I don’t understand his hair and thus he is not worthy of a proper name. The Boss is shocked to learn from one of his buddies that Alex works for him, but immediately takes that information and uses it to hit on her during lunch at work the next day. She plays it coy but also kinda blows him off. Someone’s been reading The Rules…

…Or she’s just super super obsessed with dancing. This gets clarified when she goes home from work, revealing her post-work routine to be watching fancy ballet on public television and doing her own dance training. Her style of dance training is not exactly ready for PBS.

Alex is obsessed with dance the way that a really shy guy gets obsessed with the prom queen — she keeps going to the local fancy ballet academy to see about applying to their program, but then chickens out just when it looks like she might go for it. In her case, she’s just super-intimidated by her lack of fancy dance experience — apparently, she doesn’t think her high-tech stripteases are good enough job experience.

So instead she goes to see an old lady friend who is very nice and tells her to follow her dreams. Part of me would love it if Alex was like “I do, ma’am! In front of an audience of cheering men tossing singles at me, every night!” No, instead she goes confess to a priest that she’s been thinking about sex and also that she doesn’t think she can follow her dreams. What Alex doesn’t know (SPOILERS) is that Problem A will solve Problem B!

It’s time for another music video — Alex and her friends work out while listening to I Love Rock and Roll. And then they discover the dancing of the STREETS! Which is to say, breakdancing and the gestures of a traffic cop. Plot! This movie does not have one.

Well, there is a whole thing where one of her friends/co-workers is an aspiring figure skater, and then during a big important figure skating recital, she falls down a bunch, and next time we see her she’s dancing at a REAL strip club, because (to quote Jason the roommate) “That is what happens to you when you fuck up at figure skating.” Alex pulls her out of the club and tells her to follow her dreams. I know technically this movie was written in the days before copy/paste, but it’s kinda hard to believe.

Oh, and there’s another thing where the cook at the not-strip-club wants to get into stand-up. His specialty? Pollack jokes. Remember Pollack jokes, Frank? Classytimes. He goes to LA to pursue his dreams, but comes back to Pittsburg to go to a costume party and/or sleep with the waitress he’s been into all move long? I don’t really know.

What this movie lacks in plot, I will admit, it makes up for in crazy awesome dancing, and I’m kinda on board with that. Exhibit C (featuring Penny from Dirty Dancing Cynthia Rhodes!):

I guess the real plot of this movie is as follows: The Boss saves Alex from some gropey mcgees in the parking lot one night, and she finally agrees to go on a date with him. She bangs him hardcore at the end of said date, and then they get a we’re-falling-in-love montage! But then Alex sees him take his ex-wife to a ballet recital, freaks out, and breaks a window. To which The Boss responds by taking Alex out to a fancy lobster dinner. At said dinner, Alex wears a cumberbund, suit jacket and cuffs. The suit jacket comes off halfway through, just in time for Alex to bitchily inform The Boss’s ex-wife (making a random appearance) that she’d been banging The Boss’s brains out. And then Alex and The Boss have sex again. Because of how they’re in love.

Thinking about that last paragraph gives me a migraine. Let’s move on.

Alex admits once again that she’s freaking out over following her dreams, but when The Boss gives her yet another push, she finally goes to Fancy Ballet School and gets an application. And who should follow her there to observe her finally applying? And then call a friend of his who happens to be on the admissions board for Fancy Ballet School and ask him to do a solid? That’s right, The Boss! Way to go, The Boss.

Except no, bad plan, The Boss! Because while Alex is super-excited to get the letter inviting her to audition, when she finds out that it was because The Boss arranged it for her she gets miffed and yells at him. Dude, it is not the first time and it is not the last time that fucking one’s boss ends up benefiting your career. I don’t know this from experience, to be clear. I just know about the world, Frank. I know how it works.

This is when it becomes important to remember that in most ways, Alex is a bratty teenager, because of how she is EIGHTEEN YEARS OLD. So of course she reacts with a temper tantrum. (No offense, teenagers reading this. I’m sure you’re very rational and reasoned people who never, ever throw temper tantrums.) And then she decides to blow off the audition.

But then for some reason — because again, she has the emotional consistency of a teenager — she decides to go ahead and audition anyway. Maybe because her old lady mentor died? And then someone said “don’t you understand? you give up your dream, you die”? I guess. The important thing is that she doesn’t audition with something fancy and ballet-ish, no siree. She brings Fancy Ballet School the dance of THE STREETS!

And you know what happens after that? She walks outside — and The Boss is there with a bouquet of flowers (even though he has no way of knowing how the audition went yet, because IT JUST HAPPENED) and her dog is there with a big red bow on (oh, yeah, Frank, she has a dog, I guess that’s kind of important) and she smiles and they hug and kiss! And that? IS THE END OF THE MOVIE.

You know what they call this? They call this a FIRST ACT. Basically, Flashdance is the first third of a movie about a young steelworker/stripper who joins a prestigious dance company and struggles to achieve her dreams of being taken seriously as a professional dancer. Except, you know, without any of that actual conflict or narrative.

On the one hand, I enjoy the post modern assumption on the part of the filmmakers that we as an audience understand where the story goes next — it’s a movie, it wasn’t made in Europe, she’s gonna join the ballet company and be very very successful and HER DREAMS WILL COME TRUE. On the other hand, it’s kind of incredibly lazy and maddening; this movie feels awfully long for 90 minutes.

Also, Alex as a character makes no sense, and that goes doubly so for the love story, and overall it’s just a really weird exercise in movie-watching. BUT! BUT! BUT! the dancing, as strange as it is, really is fucking amazing. And that’s the awful thing about dance movies, Frank. They can be THE WORST. But if the dancing works, then they will always be THE BEST.

Posted on November 8, 2011, in All the Spoilers, Movies and tagged boobies, flashdance, jennifer beals, joe eszterhas, there's no such thing as a bad dance movie. Bookmark the permalink. 2 Comments.