← “Supernatural”: The Skip It/Watch It Guide
Liz Tells Frank What Happened In “Jay and Silent Bob Strike Back” →

Liz Tells Frank What Happened In “Upside Down” 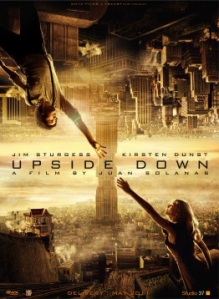 As you know, while I deeply enjoy mocking the shit out of mock-worthy topics, I try to be an optimist when it comes to the stuff I set out to tell you about. Especially films and whatnot which show more ambition than, you know, some stupid fucking Katharine Heigl movie. We’ve seen boy meets girl, right side up before, after all. Boy meets girl, upside down? Now, that’s something new.

What I’m getting at is that I know I promised to tell you what happened in Upside Down last week, but I didn’t get to it. One reason why? Frank, I actually kind of liked it!

I’m embedding the trailer below because it’s important you understand the expectations I came into this movie with — but the short version of the premise is that in some alternate universe, there are two planets locked in orbit with each other, each with its own gravity but…

Oh, I’m not going to explain the science, largely because explaining the science means thinking about things like “how do the tides of the ocean work?” and “Wait, what about sunrises and sunsets? What about NIGHT AND DAY?” Asking these sorts of questions gets us nowhere, Frank. Let’s move on!

The important thing about these two worlds are the following three rules (yes, copied and pasted from Wikipedia):

Frank, you might say to yourself, some of those rules sound completely arbitrary except for the purpose of generating plot complications! Let’s not dwell on that, Frank!

Because the whole thing is a big ol’ class warfare metaphor: The world on the bottom is working class, while the world on top is fancy-pants rich, right down to enjoying upside-down martinis made with down-below liquor.

Our hero, as these stories tend to go, comes from the down below world — he’s an orphan who happens to meet a nice young lady from up above because his aunt, who he visits upon occasion, lives high up in the mountains. She, in fact, lives close enough to the upstairs world for two children to shout at each other across the expanse between the two planets, and eventually befriend each other.

So, as teenagers, Jim Sturgess and Kirsten Dunst are deep in teenage love, using ropes and whatnot to drag her down to his level (that’s just the way that came out Frank I can’t help it) and frolic in the woods. But oh no apparently up above people and down below people aren’t supposed to fraternize, or something — the big thing is that they get caught, and in the escape or whatever Kirsten Dunst falls back up to her world and hits her head and blood trails out.

Cue the “10 Years Later” chyron, which finds Jim Sturgess working with this magic pink pollen his aunt in the mountains discovered — a pink pollen generated by bees which have gone back and forth between the two worlds, high up on the mountains.

This pollen? Basically floats between both planets! Which is a really cool scientific discovery! What is Jim Sturgess using the pollen for? An anti-aging cream for rich ladies up above!

You might be tempted to say, dick move Jim Sturgess. But it turns out to be pretty smart, because when Jim finds out that Kirsten is not dead like he presumed after her fall, but alive and working for the major evil corporation ruling these two planets (OF COURSE there’s an evil corporation, Frank, don’t be silly), he comes up with a plan.

Well, sort of. WORST THING ABOUT THIS MOVIE #1: It is never explained how Jim Sturgess lands a big fancy job. It just kind of happens. It is super-dumb. But suddenly he’s got access to the TransWorld offices, bringing him closer to Kirsten than ever before!

I mean, his primary thing is working on his facelift powder. However, he manages to make a friend out of Timothy Spall, a guy working Up Above (like, literally — Jim’s cube is on the floor that borders the boundary of the other world, which means that Timothy Spall is working in his own cube, right above him).

VISUAL SPECTACLE AHOY! Why anyone would design an office like this falls under the category of “questions we try not to ask because this movie is weirdly compelling in its way and poking at it too hard will just ruin things,” so let’s not ask it.

He befriends Timothy, and with his help and some sleuthing, is able to track down Kirsten Dunst! But here’s the twist: Kirsten? HAS AMNESIA.

WORST THING ABOUT THIS MOVIE #2: KIRSTEN HAS AMNESIA and doesn’t remember anything from before her tragic teenage fall. Which explains why she never pursued Jim after her fall, but also FUCK THAT SCIENCE IS TOTALLY OVER THIS DRAMATICALLY CONVENIENT AMNESIA BULLSHIT THESE DAYS. Maybe soap operas in the 1970s got away with it. But it is the year 2013, and NO MORE.

However, Jim is not to be deterred! Frank, remember rule #2 above? With Timothy’s help, he gets clothes from the upstairs world, along with samples of “inverse matter” for his experiment, and creates weights that will let him flip direction and totally schmooze on Kirsten.

And it proves pretty effective! She’s totes into him, despite not remembering that they used to make out as upside-down teenagers, and doesn’t mind the fact that after an hour together, he has to run away for fear of catching on fire. (See Rule #3 above.)

Eventually, of course, Jim’s not-super-smart plans for sneaking upstairs fall apart on him — just in time for Kirsten to start remembering him. But the police give chase, and…

Okay. Look, Frank, I could tell you what happens at the end of this movie. But that would involve me pretending that the third act actually makes real sense.

It ends happily, don’t worry! Timothy uses the magic pink pollen to create a serum that lets people move between the two worlds. And I guess at some point, Kirsten and Jim had sex, because Kirsten’s pregnant with twins.

WORST THING ABOUT THIS MOVIE #3: KIRSTEN IS PREGNANT WITH TWINS? When did even they have sex? Doesn’t Rule #3 mean that her vagina should have caught on fire? Unlike questions I was asking earlier, Frank, these actually matter to me.

(I will say that the fact that this story takes place on two different planets means that technically this movie is about alien-on-alien procreatin’, which is fun to imagine pitching to studio execs, you know?)

Here’s the thing: I really enjoyed the visual look of this movie, and the effects are pretty great. There’s so much imagination at work here, Frank! It’s just tied to some really, really terrible writing.

Remember how Judd Apatow used to respond to the question of why Heigl didn’t just get an abortion in Knocked Up by saying that then “The movie would have been 10 minutes long”? The screenplay for Upside Down pushes that sort of logic barrier maybe right over the cliff.

Does that make it worth your time? I don’t know if I have a great answer for that. I enjoyed watching it up until Act 3 made my head hurt, mostly because of the visual spectacle.

You know what? I just came up with the perfect venue for Upside Down: Bars with HD TVs, which show movies on mute when sports games aren’t playing.

That way, the pretty pretty pictures get put front and center, while you catch occasional glimpses of the subtitles, so that you understand what’s happening from scene to scene. This way, all of Upside Down‘s strengths are on full display. And no one has to think about the plot at all.

Posted on March 26, 2013, in All the Spoilers, Movies and tagged Jim Sturgess, Kirsten Dunst, parallel universes, Upside Down. Bookmark the permalink. 10 Comments.

← “Supernatural”: The Skip It/Watch It Guide
Liz Tells Frank What Happened In “Jay and Silent Bob Strike Back” →