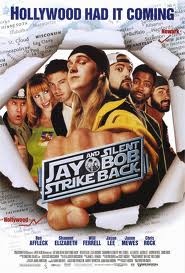 An embarrassing fact about me: After 17 years, I forget how many movies, and no shortage of ridiculous antics, I still kinda love Kevin Smith. I’m not sure why. Maybe I have a hard time letting go of things I loved in my adolescence, or maybe there’s just something about his familiar patter that I find comforting — the point is, while I haven’t seen Red State or whatever else he’s been working on lately, I’m still deeply fond of him.

I say this because I stumbled into rewatching Jay and Silent Bob Strike Back yesterday — Hulu Plus didn’t even bother putting commercials on it, Frank! — and it was like finding a musty old afghan in the back of the closet, curling up in its familiar comfort, and trying to ignore the smells.

Jay and Silent Bob, Frank, is Kevin Smith’s fifth film in the so-called “View Askewniverse,” a universe of interconnected characters largely residing in suburban New Jersey but truly united by their love of big words, gay jokes and nerd references. Two of these films were grounded indie fare (Clerks, Chasing Amy), while Mallrats went the Porky’s-esque route and Dogma… Yeah, I’m not really sure what Dogma was.

The point is, Smith wanted to move on from writing films heavily dependent on catchphrases and drug glorification, and so he declared that Jay and Silent Bob Strike Back would be his final “Askewniverse” film.

He decided, Frank, to go out in style. By “style,” I of course mean “gross overindulgence.”

(Also, he broke this promise several years later by making Clerks II, because one of the most glorious things about Kevin Smith is how wildly inconsistent he is.)

Jay and Silent Bob Strike Back finds Smith’s equivalent to Rosencrantz and Guilderstern, pot dealers Jay and Silent Bob, in a state of flux, as a restraining order prevents them from dealing outside the convenience store that they’ve called home all these years.

But when they go complain to comic book geek Brodie from Mallrats (one of Jason Lee’s two appearances in this film), Brodie informs them that there’s a movie about to be made of the comic book based on them.

(Remember, Frank, Bluntman and Chronic? The comic that Ben Affleck and the other Jason Lee character created in Chasing Amy? It’s okay if you don’t remember. I’m sure those brain cells are being used for something that’s actually useful.)

A lot of random side adventures ensue, from Jay and Silent Bob getting hitchhiking advice from George Carlin (!!!!) to going for a ride with a live-action Scooby Gang (Riley from Buffy the Vampire Slayer plays Fred!).

This is when the bulk of the celebrity appearances begin. I have a lot of fondness for this movie, Frank, but Jay and Silent Bob Strike Back is not worthy of its cast. Just a short list:

Not all of these people are brilliant actors, but many of them are given fun stuff to do, especially when playing themselves. Especially fun is James Van Der Beek, getting his first taste of playing himself prior to Don’t Trust the B in Apartment 23 (rest in peace, B).

JASBSB‘s biggest side quest comes when Jay and Bob run into a gang of super-hot ladies who say they’re on their way to liberate animals from a medical testing lab. They are actually jewel thieves who are using Jay and Bob as their patsy, but all you really need to know about this sequence is:

1) Jay gets a love interest in the form of Shannon Elizabeth, one of the jewel thieves, who finds him charming because this movie is science-fiction.
2) Kevin Smith cast his wife as one of the super-hot ladies, and apparently there was a ton of deleted footage of his wife and Ali Larter making out that they cut for time, but the important point is do not think too hard about what this says about their marriage, Frank, seriously don’t.
3) Jay and Bob steal a monkey (okay, a chimpanzee) which drives the rest of the movie’s action — first, they’re on the run from Will Ferrell the federal wildlife marshall, then the monkey gets kidnapped and taken to Hollywood.

So now Jay and Silent Bob have two reasons to go to Hollywood. They break onto the Miramax Studios lot (note for Hollywood n00bs — there is no such thing) and appear as extras in Good Will Hunting 2: Hunting Season (again featuring Ben Affleck and Matt Damon in a really charming scene of self-parody, though I should admit that I’m a sucker for Matt Damon going meta).

Then they track down the Bluntman and Chronic shoot, beat up stars Biggs and Van Der Beek, and face off against Mark Hamill in a lightsaber battle while director Chris Rock shouts “George Lucas gonna sue somebody!”

Yes, Frank, I like this crap. I’m a human being, OKAY?

There’s a shootout with those jewel thief ladies and Will Ferrell at this point, Shannon Elizabeth helps save Jay because she loves him because this is a sane and logical universe, and Bearded Jason Lee, as co-creator of Bluntman and Chronic, agrees to give Jay and Silent Bob half of his profits from the film.

Jay and Silent Bob don’t care, because what they really want is to shut up the assholes on the Internet, but then realize that with the money, they can afford to fly around the country kicking the crap out of shit-talking Internet-using 13-year-olds. Which is exactly what they do.

Bluntman and Chronic premieres, reaction is decidedly mixed, but the premiere is followed by a kick-ass after-party featuring Morris Day and the Time performing “Jungle Love,” and Jay and Bob get to dance on stage with The Time, and they all live happily ever after.

Frank, I’ve barely scratched the surface of how meta and self-referential this movie is; I got a good percentage of the in-jokes being made, but the average human would (and should) have no clue why it’s funny for Ben Affleck and Matt Damon to make reference to doing a film “because you owe the director a favor.”

I feel like the core of Jay and Silent Bob Strike Back is summed up by this little monologue spoken by the Chasing Amy variant of Ben Affleck, directed at Silent Bob (who, remember Frank, is played by Kevin Smith crap I shoulda reminded you about that earlier):

Why in God’s name would I wanna keep writing about characters whose central preoccupation are weed and dick and fart jokes? I mean, ya gotta grow man. Don’t you ever want anything more for yourself? I know this poor hapless son of a bitch does. I look into his sorry doe eyes and I just, I see a man crying out. He’s crying out, “When Lord? When the fuck can your servant ditch this foul-mouthed little chucklehead to whom I am a constant victim of his folly, so much so that it prevents him from ever getting to kiss a girl! Fuck! When, Lord when? WHENS GONNA BE MY TIME?”

This declaration that Kevin Smith is fucking tired of this shit takes place less than 20 minutes into the movie. It’s a unique approach, saying “fuck you for watching” to your audience before you’ve even reached the end of Act 1, but that’s Jay and Silent Bob for ya, a break-up letter that cost Miramax $22 million. And it was a break-up that didn’t even take!

However, I remain perversely fond of it. It might have to do with timing: I saw this movie when it premiered, late August 2001, and it may have been the last movie I saw in theaters before 9/11 and a whole bunch of other crap thrust an unwelcome amount of adulthood upon me.

Making Jay and Silent Bob Strike Back a symbol of my lost innocence is, I recognize, ridiculous. But at the same time, I can still remember the giddy rush of its in-jokes and cameos, feeling like it was totally okay to care this much about a stupid movie, not really thinking about much else.

Kevin Smith still makes the occasional effort to shown that he’s grown up, but since making Jay and Silent Bob has done no shortage of backsliding into childish things. Which is okay. That’s life.

After all, I’m almost 12 years away from the girl who saw Jay and Silent Bob the first time. I pay my bills and work my jobs like a big girl. But sometimes I spend a few hours giggling over a stupid movie, because like it or not, the past is always present.

Posted on April 2, 2013, in All the Spoilers, Movies and tagged jason mewes, jay and silent bob strike back, kevin smith, silent bob. Bookmark the permalink. 2 Comments.