Liz Tells Frank What Happened In “The Day After Tomorrow” 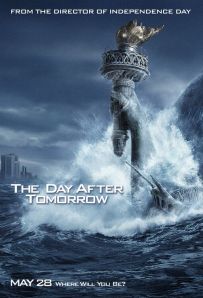 When my brother and I were growing up, we LOVED the movie Independence Day, directed by Roland Emmerich. LOVED it. We had it on VHS, and we would just watch it over and over again, chanting along with our favorite lines of dialogue — we could even re-enact Will Smith and Jeff Goldblum’s final escape from the alien ship word for word, one of us taking Will Smith’s lines and the other playing Jeff Goldblum. (I forget who would play which more. I think, because I was a nice older sister, I let him be Will Smith the most.)

Then, you know, things happened and watching buildings explode stopped being fun for a few years — however, Roland Emmerich appears to have never lost his taste for ending the world. Which would be fine, except for this one time when, to destroy destroy the planet (especially Los Angeles), he fucked up a real disaster instead of using a fictional one.

The Day After Tomorrow is one of the stupider movies I’ve ever seen, Frank (and remember that time I watched Zardoz?). This is largely because it takes the issue of climate change and instead of raising real awareness about how badly we’re fucking up the planet, makes it seem as real as a giant lizard that breathes fire.

Seriously, Roland Emmerich fucks up global warming worse than he fucked up Godzilla. And GODDAMN, did he fuck up Godzilla.

I feel like this image best sums up my feelings about the 1998 “Godzilla.” Sigh. Hank Azaria, you had to have known better.

We begin this descent into pseudo-science in Antarctica, where Dennis Quaid is some sort of arctic super-scientist/adventurer-type, investigating ice things with his buddies Guy With A Beard and Jason. I remember Jason’s name because Jason is, like, constantly fucking things up over the course of this movie — starting here, where in the course of drilling into the ice Jason BREAKS ANTARCTICA. Like, puts a big ol’ crack in it.

Well, technically it’s not Jason’s fault that Antarctica breaks, it’s super-intense climate change, which Dennis Quaid explains at some sort of science party that the Vice-President of the United States is at. This is where the concept of super-storms gets introduced — you know, like regular storms, but super-intense and fast — but don’t worry, won’t be the last of it!

The Vice-President isn’t buying any of the climate change stuff, but also at the science party — oh, which is I guess in India where it is snowing, because this movie takes place in the not-too-distant future and things climate-wise are already pretty bad — is Ian Holm, who is another scientist guy studying the ruin of our earth.

Ian Holm and Dennis Quaid become friends before heading off to their respective corners of the world; Ian to his little lab in the UK and Dennis to ugh, I forget where in America, but it doesn’t really matter.

What matters is that he’s paying a visit to Jake Gyllenhaal, who makes my top 10 list of “least-likely on-screen teenagers ever” — I mean, according to math he was 23 years old when he starred in this movie, but he LOOKS like he’s at least 28, you know?

Jake makes up for the fact that he doesn’t look like a teenager by playing the world’s most annoying parody of a teenager — oooh, the super-genius nerd variation. See, Jake’s going to New York City for an academic decathlon competition, largely because he wants to bone teammate Emmy Rossem.

Emmy is an actress I hear is good on Showtime’s Shameless, which I will never know because holy smokes she is bad in this movie and Phantom of the Opera and that Poseidon Adventure remake… Damn, homegirl’s been in some bad movies. More importantly, she is basically completely free of personality in this movie. Let us see if we can avoid speaking of her ever again.

So Jake is in New York, Jake’s mom/Dennis Quaid’s estranged wife Sela Ward is a kid cancer doctor in a place that’s not New York, and Dennis Quaid has to go explain science to the Vice-President again or something, I dunno. What matters is that when the weather starts freaking out on everyone for serious, the family is separated!

The first big sign that the planet’s circling the drain hits you and me close to home, Frank — Roland Emmerich has a special talent for fucking up the city of Los Angeles, and this time his method of choice is hailstorms and tornadoes. Oh, and an Angelyne billboard, which smashes a weather reporter dead.

Then everything gets worse — I think the rest of this movie takes place over like the course of a week, over which basically everything north of Texas becomes a frozen wasteland. You know. Science.

New York gets flooded by a tsunami, Americans try to cross over the border to Mexico — GET IT? IRONY — and Ian and his science buddies in England freeze to death. Ian’s science buddies include SUPER-FINE ADRIAN LESTER so I am super-pissed.

Jake is stuck in New York while all this shit is going down, taking shelter in the New York City Public Library with a bunch of random people (including our friend Glenn Plummer from Showgirls! Remember those two years of the 90s when Glenn Plummer was in all the movies?).

Wait, I have to mention Emmy Rossem again, because for such an allegedly smart person, she is too dumb to notice that a minor flesh wound she incurred during the flooding of New York has gotten infected enough to kill her. So Jake decides to go looking for antibiotics. This leads to like ten minutes of Jake and his buddies getting chased by a pack of CGI wolves who escaped from a zoo. It is super super dumb.

Not as dumb as this: Dennis Quaid, thinking rationally, decides that he’s gonna snowshoe from wherever he is (D.C., maybe?) and get Jake, because he ain’t been such a good daddy over the years and this will make up for everything, forever.

His buddies Guy With A Beard and Jason come along, because sure, and Guy With A Beard dies along the way because Jason fucks something up, I’m pretty sure. (Jason lives. Only others pay for Jason’s failures.)

This is when the super-storms start being a thing, and everyone literally has to outrun, um, the weather. Y’ALL IT IS SUPER-DUMB. Just watch:

Frank, I don’t know if I’m fully communicating to you how mad this movie makes me. Here’s a good example: Remember how I mentioned that Sela Ward is a kid cancer doctor? Well, her hospital gets evacuated, but there’s no ambulance for this one super-sick kid under her care, and the kid’s parents are AWOL. So it’s Sela Ward and cancer kid, alone in a hospital, with seemingly no hope.

Now, in the real world, this is a super-serious real thing that doctors have to deal with in disaster situations, and it often leads to doctors having to make incredibly tragic decisions. Does this movie even attempt a hint of realism with this storyline? Does the issue of smush-inasia even come up? NOPE.

Instead, Sela Ward just hangs out in the hospital with the kid until an ambulance magically shows up to evacuate him. Because why bother accurately portraying disaster scenarios when you can just wave your magic plot device wand and make everything okay?

Anyways, Dennis Quaid makes it to New York. A lot of people have died, but Jake and his people are still alive. They leave New York, Dennis and Jake and the rest head down to warmer climates via helicopter, and there’s a lot of talk about how “hopefully we’ll learn from our mistakes.”

Maybe Roland Emmerich felt like he was doing a good thing, making this movie. (The IMDB trivia page is full of hilarious facts that indicate as such.) But the truth of the matter is, he did pretty much the exact opposite. And god help us all, for reals.

Posted on May 8, 2013, in All the Spoilers, Movies and tagged climate change, Dennis Quaid, disaterous disater movies, end of the world as we know it, Jake Gyllenhaal, post-apocalyptic!, Roland Emmerich, The Day After Tomorrow. Bookmark the permalink. 2 Comments.