So the first time I read Transmetropolitan, I was visiting Whitney, one of my oldest friends, in New Jersey. It was 2005, I was on a very random cross-country trip, and Whitney had a day job, and so spending the better part of 48 hours reading her trade paperbacks made sense.

Then, Transmetropolitan BROKE MY BRAIN.

By which I mean I loved it. Even though it BROKE MY BRAIN. And gave me nightmares. And did…

It did some other things, Frank. They mostly involve shouting. I shall explain.

Transmet, as it’s conventionally know, is writer Warren Ellis and artist Darick Robertson’s magnum opus for Vertigo Comics, a five year odyssey through an imagined future where genetics are easily manipulated, technology is something you swallow as pills, and we just call New York City “The City.”

The comic chronicles five years in the life of Spider Jerusalem, a journalist who you should imagine as Patrick Stewart on ALL THE DRUGS, and not just because Patrick Stewart has been vaguely associated with the project, but because it is super-fun to imagine Patrick Stewart shouting things at people like “I’m giving up the memory of a truly legendary bowel movement for you. I had to kill it with a shovel, you know.”

Spider, already a famous journalist, gets dragged back from exile in the mountains to the City, where he resumes his gonzo journalism career. Basically, the pitch for Transmet is “Hunter S. Thompson, as played by Patrick Stewart, gets a bunch of guns and a laptop and shouts at people a bunch whilst also revealing The Truth.”

His targets are many and varied — at least until a Presidential campaign rears its ugly head. The incumbent, an asshole that Spider has nicknamed “The Beast,” faces off against a new asshole nicknamed “The Smiler.” Both are clearly terrible human beings, but Spider’s a bit more on board with the Smiler, largely because he likes Vita, the Smiler’s political director.

Then, unfortunately, Vita gets assassinated and turned into a martyr figure, which does three important things:

1) Help the Smiler win the election.

2) Reveal that the Smiler is even worse than the Beast.

And then it’s open war between the two, with the Smiler using his political power to rain destruction down upon the city (sometimes literally) and Spider using his powers of journalism to prove the evil that the Smiler is capable of.

Frank, I’m not doing a great job of capturing exactly why Transmet is such a fixture within the comics world, why it has such a hold on the collective memories of its readers. Let’s zoom out a little bit.

For one thing, it had just oodles of imagination; from its casual incorporation of fast food chains serving human meat to the popular trend of adding alien DNA to your own genetic makeup to a television show for children entitled Sex Puppets, its portrayal of technology on the rise and the human race in decline is fascinating and fully-realized.

Also, Transmet was full of killer plotting; when you read it all at once, you don’t really appreciate the committment behind it, but the fact is that Ellis and Robertson spent five years telling this story, and this story? It MOVES, bringing in characters and communities for a richly nuanced tale that feels much longer than 60 issues.

That said, it also knew how to slow things down, with stand-alone issues that explore one nugget of character or community, making the City feel a little bit bigger. One of my favorite stand-alone issues tells the story of Mary, a photojournalist who signed up for a cryostasis service in the early 21st century, and is awoken in a strange world she barely understands. Mary plays a key role later, but even if she didn’t, she’d still be yet another fascinating facet of the series.

Because for a series that is brutal in terms of violence, not to mention its depiction of where we might all be going, Transmet was also incredibly, beautifully human. It’s down to the character of Spider, who maintains the persona of a raging psychopath, but also feels things so deeply; it’s impossible not to be moved, when something moves him.

All that, PLUS it was FUNNY. Really fucking funny. Here are just a few of my favorite panels. 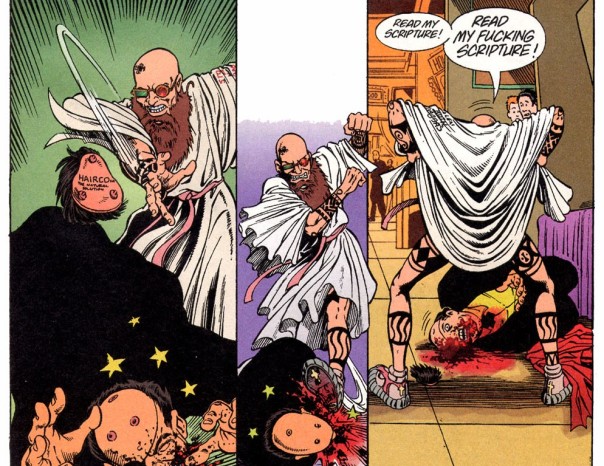 Frank, it’s really worth reading the whole thing. I don’t know if I’d recommend inhaling it in 48 hours, the way I originally did. Two weeks is a good pace, probably: Fast enough for you to keep all the connections straight in your head, but slow enough that you don’t completely descend into Spider’s worldview, climbing on taxi cabs, shouting “FILTHY ASSISTANTS” at random passersby and yearning for a bowel disrupter.

It was a rough couple of days, the days after I finished Transmet the first time. For people around me, that is. Me? I had a great time.