I have a pretty long list of things to tell you these days — like Orphan Black! I hear really good things about Orphan Black, Frank! — but I keep getting distracted by other stuff. You know, life, the universe, bizarre Tom Hanks movies…

I stumbled into Larry Crowne on HBO the other day while procrastinating some tasks, but had no plans to give it a single additional thought ever again until for some reason, I found myself trying to describe it to a friend, and was like, shit, this movie is WEIRD. So now you’re going to learn about it, Frank. Get excited!

Larry Crowne is the story of people rebuilding their lives in an almost completely conflict-free fashion. It is the story of a large cast of charming actors standing around and (for the most part) being pretty nice to each other. It is the story of a man finding freedom by buying a used scooter. It is simultaneously really strange and really boring, which is in its own way vaguely interesting? It’s a weird movie, Frank.

Let’s see if I can sum it up pretty quick.

Larry Crowne is Tom Hanks (who also co-wrote and directed this thing), and Tom Hanks (after 20 years in the Navy) is now working at a big box store. Tom Hanks loves working in a big box store! It is like his fucking dream or something! But then he gets fired because he doesn’t have a college degree!

This sucks for Tom Hanks! Because of the economy, you know? It’s like, hard for people who aren’t famous movie stars to find work? So Tom Hanks’s next door neighbor Cedric the Entertainer suggests that Tom Hanks go to community college and get a degree that will hopefully help him find a real job down the line. Sounds good to Tom Hanks!

What also sounds good to Tom Hanks is not spending a lot of money on gas. Here’s literally how it plays: Tom Hanks takes his SUV to a gas station (he is a single man with an SUV, which makes all the sense in the world), and while he loads in a $74 tank of gas, he watches two dudes on scooters fill up for a buck. So Tom Hanks buys a used scooter. And it changes his life!

Not exaggerating. See, when Tom arrives for his first day of community college, he meets a girl named Tanya or Tilapia or something in the scooter parking lot and charms her with his middle-aged fuddy-duddyness.

(Tawonga is played by Gugu Mbatha-Raw, whose name I actually managed to spell right on the first try! Not because I am a crazy spelling genius, but because I am familiar with her work as Martha Jones’s sister Tish on Doctor Who. We’ll just keep calling her Tish here.) 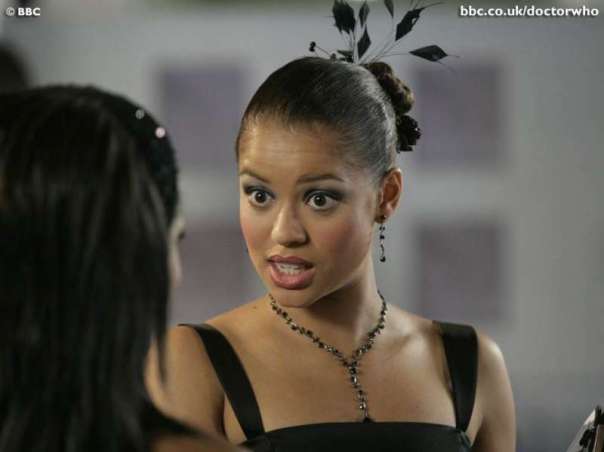 I don’t care how many JJ Abrams shows you star in, Gugu, I will never forget the weird hair thing you wore in “The Lazarus Experiment.”

Tish, who’s rocking a low-grade case of Manic Pixie Dream Girl, almost immediately adopts Tom Hanks as her project, inviting him to join her scooter gang, giving him a makeover, and reorganizing his house. Why does she do all this? Don’t bother your pretty little head with questions like that, Frank. Just know that it’s not a sexual thing, because Wilmer Valderama is her boyfriend and also TOM HANKS BE A BIT OLDER THAN HER, YOU FEEL?

And anyways, why would Tish be Tom’s designated love interest? She is not, after all, ANOTHER INTERNATIONAL MOVIE STAR who happens to be in this movie! I refer of course to Julia Roberts, a frustrated college professor who teaches English and a class best described as “how to give a speech for people who don’t know how to talk to other people.”

To cope with the frustrations of her job, she drinks a lot and is sulky, but nothing really interesting happens with her until she and Bryan Cranston have a big fight, she decides to leave him, and he gets arrested for drunk driving. And now Julia is single and ready to mingle!

Sigh, what else happens in this movie? Oh, right! Tom Hanks’s job in the Navy was food preparation, and an old military buddy gives him a job working in the kitchen of his diner. And Tish gets him some cool new clothes. Tom Hanks is LOOKIN’ GOOD, Y’ALL!

Also, after his (pre-movie, off-camera) divorce, Tom Hanks made some bad mortgage decisions regarding his house. But don’t worry! Sulu is his economics teacher, and thanks to things he learned in his economics class, he’s able to figure out the best way to handle his fucked up financial situation, because Tom Hanks read an article about sub-prime mortgage loans one time–

Okay, I shouldn’t judge. Dave from Happy Endings sounds smarter than me when I try to explain this topic. (Also, NEVER FORGET Happy Endings, Frank.)

Oh, wait! Frank, I forgot to mention that the night of Bryan Cranston’s drunk driving arrest, Julia Roberts kissed Tom Hanks OMGWTFBBQ AM I RITE?!? And then she remembered that she was his professor and that was bad. So they’re not allowed to kiss anymore.

Julia’s speechifying class is populated by a bunch of vaguely-familiar-looking character actors. (I think I caught a glimpse of Charlotte Lu from The Lizzie Bennet Diaries!) They all become buddies, and even help Tom Hanks move out of his house into a smaller, more affordable apartment, because people are inherently good and do nice things for each other.

And because this is college, finals happen! And Tom Hanks gives a very good final speech for his final and Julia Roberts gives him an A-plus! Way to go, everyone!

When the next semester starts, Julia Roberts is bummed to discover that Tom Hanks is not taking another one of her classes. But then she gets a note from him asking her to come to his place and eat some french toast, and she’s like, oh, he doesn’t want me to be his professor anymore so we can make out? Cool! I’m on board with that shit!

So she goes over to his new apartment, and he’s made her french toast, and they kiss again. And THE END. I guess french toast and kisses count as a happy ending?

But seriously, Frank, I really don’t get the point of this movie, I really don’t. Maybe it’s vaguely inspiring? I mean, because I am a human being who breathes air, I like Tom Hanks, and so seeing Tom Hanks go from schlubby mid-life crisis man to hip self-possessed duder was nice. The ending is super-cheesy, but I’m glad that he and Julia Roberts could work things out. And Tish from Doctor Who was actually pretty fun. I strangely don’t regret wasting two of my precious hours on this earth on this movie!

And yet, I think the best way for me to end this is with a sick burn not by me, but the master of sick film-related burns, Mr. Roger Ebert:

“Larry Crowne” has Tom Hanks and Julia Roberts and a good premise and a colorful supporting cast, but what it doesn’t have is a reason for existing.