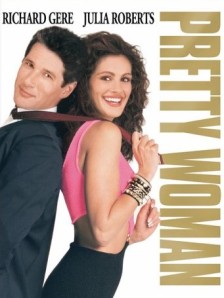 As you and I are both vague-to-huge nerds about screenplays and story development, I wonder if you’ve ever checked out the original script for Pretty Woman? There’s a real reason for me asking this: $3,000, as the project was called then, lays claim to a bit of interesting history for the film industry.

Here’s the story: It was heralded as one of the better-written scripts of the year, intended as a dark take on prostitution, drugs and whatever else sucked about the time period. But writer Jonathan Lawton’s rather dark take on a Hollywood Blvd. prostitute getting picked up by a wealthy businessman was then rewritten by script doctors Robert Garland, Stephen Metcalfe and Barbara Benedek for director Garry Marshall.

Marshall and his team then transformed the gritty tale into a light-R Cinderella-esque fairy tale, and made like, ALL THE MONEY. Like, ALL OF IT.

But everyone who I heard discuss this made the rewrite sound like a bad thing. The triumph of commerce over art, you know? So I wanted to find out for myself, and thus, this week I not only rewatched Pretty Woman in its final incarnation, but managed to Google up a copy of the original $3,000 script.

And HOLY SHIT, FRANK. WHAT THE FUCK DID I JUST READ?

A short list of things that are different between $3,000 and Pretty Woman:

In short, Vivian and Edward are much less likeable, selfish people who represent the problems with the 80s in no shortage of ways and spend most of the movie yelling at, belittling or misunderstanding each other. Also, real estate is king and the economy will never falter.

All of this is surface, there’s no character growth, and did I mention the six pages devoted to Vivian in her fancy underpants? It’s seriously one of the most 80s things I’ve ever read, and I’ve read Bonfire of the Vanities twice.

What I’m saying, Frank, is that the script is a WEIRD read — super-super weird — but I recommend it in more of an anthropological sense.

Though it does have its charms, mostly because the ultimate Pretty Woman shooting script includes a number of details and dialogue from this draft, including a few lines I’ve always been very fond of. Stuff like:

“Why do guys always know how to hit a girl? Wham, right across the cheek. Nice and high so it feels like your eye is going to explode.”

You know, dialogue burned into my brain thanks to a childhood of slumber parties–

(Mom and Dad, I don’t know when we started watching Pretty Woman at slumber parties, but I assure you that it was at a very age-appropriate time and we didn’t really understand the whole hooker/pimp/drugs thing anyway.)

–My point is, $3,000 has interesting elements, but Marshall and his gang took its bones, stripped out its dead weight, and built the Six Million Dollar Man of romantic comedies on top of it.

This, I realize, is not only a complete reversal of what the original project was meant to be, but also what I originally believed the mythos of $3,000 vs. Pretty Woman to be.

And it opens up all sorts of issues we could really dig into exploring — most especially how romantic comedies are seen as a lesser genre not worthy of critical attention. (Maybe because they primarily appeal to the 51 percent of the planet that doesn’t have a penis?) But to dig into those issues would keep me from making fun of the film’s 1990-era outfits, so let’s just move on.

(Did I write that paragraph ironically or unironically? You be the judge.)

It’s been a while since my last slumber party, so my recent rewatch of the film was with relatively fresh eyes. I don’t know how much I have to tell you about Pretty Woman that you don’t already know, but it totally holds up! Like, really really well.

Richard Gere’s character arc from cold businessman to… well, warm businessman is touching in the execution. All the side players are some of the sharpest character actors available at the time: Jason Alexander, Laura San Giacomo, Larry Miller. Plus, Hector Elizondo! Kind, patient, vaguely ethnic fairy godfather to romantic comedy heroines! New theory: New theory: Hector Elizondo in the 1990s = Stanley Tucci in the 2000s.

And of course Julia Roberts is a star. That’s all you can say: She’s a star. Watching Pretty Woman means forgetting the past 22 years of half-decent to terrible decisions she’s made since this movie, and remembering that no matter what, girlfriend’s got game.

Really, the only problem is the clothes. Here is, off the top of my head, my personal ranking of all of Julia Roberts’s outfits in this movie, from best to worst: 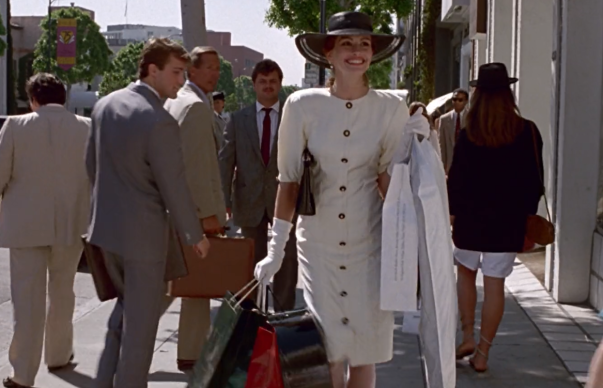 So, Frank, it’s no shock to you that I enjoyed rewatching this movie — I am, after all, pro-romantic comedies that don’t star Katherine Heigl.

But let me leave you with this: One of the most profound things I kept noticing during my rewatch was this undercurrent of how Vivian doesn’t know her own worth.

Constantly, in every negotiation, she is undervalued — by other characters as well as herself, calling herself dumb for not finishing school, either not believing in her own potential or being terrified by it — until the ending.

Not only does she refuse to compromise her desire for real love for “baby, I’ll get you an apartment,” but she’s now making real effort to change her life. Because you never know what you can do until you stop doing the easy thing, and start trying instead.

Important lessons for us all, whores and non-whores alike.

Posted on August 13, 2013, in All the Spoilers, Movies and tagged $3000, A+ on the bechdel test, garry marshall, Julia Roberts, pretty woman, richard gere, romantic comedies. Bookmark the permalink. 8 Comments.