Netflix has been in the news a bit this week, which always leaves me a little nervous because many times (as you might have observed), what we discuss here is directly affected by what’s available on Netflix Instant.

For example, this weekend I saw that almost the entire run of The Sarah Silverman Program was now available, which made me happy because there is this one incredible episode of that show that I’d been wanting to watch again. But weirdly, Frank, when I put out the question on Twitter and Facebook of whether or not I should tell you about this one episode of The Sarah Silverman Program that happens to guest star Christopher Eccleston, there was not even the slightest amount of interest!

Now, if someone else were to ask me if I wanted to hear about this episode, I would say FUCK YES, because it’s incredible — so I can only assume that this is a sign that THE PEOPLE MUST BE TOLD. I cannot let them live in ignorance much longer.

First off, Frank, let me explain about The Sarah Silverman Program, which was a single-camera sitcom starring the titular comedienne, running on Comedy Central from 2007 to 2010. It is noted for being the first show Community creator Dan Harmon ever ran (though he is not shy about describing how badly it went). It is also noted for being batshit crazy, targeting the most offensive subject matter as often as possible, and being at times very very funny in the process. Maybe a 54 percent success rate overall?

The episode we’re discussing today, “I Thought My Dad Was Dead, But It Turns Out He’s Not,” isn’t quite as offensive as other episodes in Season 2 — which is to say it isn’t actively racist or full of rape jokes. I’ll go ahead and tell you what the main storyline is quickly: Sarah believes that she and her sister Laura (played by Sarah’s real sister Laura) are orphans, until she runs into a man she recognizes to be her father at a bookstore. Their reunion is strange but joyful (when he denies being her father, she challenges him to make out with her, “because if you’re not my father, it wouldn’t be weird”). 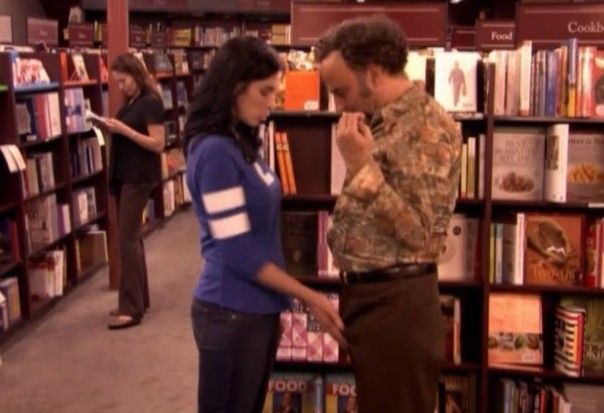 When I said this episode was tamer than other episodes, I only sorta meant it.

But then, after Sarah breaks the news to Laura on a talk show hosted by Missi Pyle (!!!!!), she and her father perform a duet version of Lisa Loeb’s “Stay” on the air that becomes a huge hit, leading to them forming the “Loeb Trotters” duo and hitting the road performing Lisa Loeb covers and rediscovering their bond — until Sarah replaces her father with someone younger and hipper. Her father is hurt, the audience boos, and Sarah learns a lesson about “going younger,” though she and her father do manage to reconcile before he once again “dies” (it’s strongly implied that it’s another fake). It’s all very sweet and weird and funny.

BUT IT’S NOT WHY THIS EPISODE IS AMAZING. (Okay, the part where Lisa Loeb is backstage at a Loeb Trotters concert and they steal her glasses is pretty amazing. I like Lisa Loeb! That whole album where the cover’s pink and I think she’s wearing a lot of feathers is really good.) 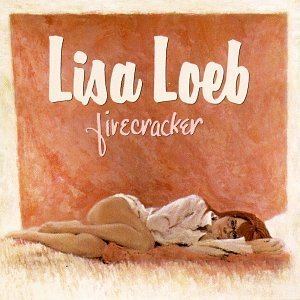 I wrote the above description from memory. I have no idea why I thought she was wearing feathers.

What’s actually amazing is the B story (sitcom writer speak for “the other stuff that’s happening when the main girl’s not on screen). Sarah’s best friends Brian (played by the very funny comedian Brian Posehn) and Steve (played by the very funny Steve Agee) are totally broke, major stoners and in love, but it’s the first one that’s of primary importance for this episode. While at a store that may in fact be the same location where they filmed the scene with Sarah and her dad, Brian finds the complete DVD collection of Dr. Lazer Rage, his favorite cheaply made British science fiction drama of all time. And despite the fact that they can’t afford it, Brian buys it because the picture of Dr. Lazer Rage on the box promises him hours of pure enjoyment.

If Christopher Eccleston appeared on a box and told me to do something, I would do it.

Let me be really clear here — Christopher Eccleston probably has about five lines of real dialogue in this episode, but EVERY SINGLE ONE OF THEM makes me laugh hysterically. It’s a combination of three factors: One, he’s doing a pitch-perfect send up of his work as the 9th Doctor on Doctor Who (if you couldn’t guess, Dr. Lazer Rage is an “homage” to that show’s classic run). Two: He is wearing a terribly shiny silver jacket. Three: DR. LAZER. RAGE.

We get to see some clips of Dr. Lazer Rage playing on Brian and Steve’s TV as they fight over whether Brian’s totally wasted their money — Brian claiming that he’s going to watch those DVDs so many times they’ll pay for themselves, an argument every nerd has made about every TV box set purchase since the end of time. (For the record, the only box sets for which that is actually true: Firefly, Sports Night, and nothing else.)

Dr. Lazer Rage does stuff like fight a robot and fight a dinosaur, and let me put this in all caps so as to thoroughly make my point: IT IS SO FUCKING FUNNY. But because Brian broke the bank on those DVDs, Steve takes a roadie gig on Sarah’s tour, writing in a letter to Brian that he misses him and that “the road is full of temptations.” But Brian’s still determined to prove his point, obsessively rewatching the episodes — until Dr. Lazer Rage talks to him again through the TV!

“Loving relationships are much more important than proving a ridiculous point and are more valuable than a DVD box set. What I’m tryin’ to say is, I sleep alone at night,” is what Dr. Lazer Rage says. Then he sadly shuffles away down the cheaply built sci-fi set, firing off one last laser round before doing so. 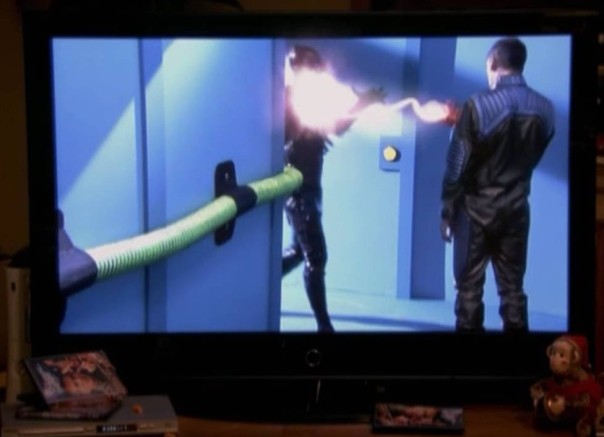 And that’s what convinces Brian to go track down Steve and have a romantic reuniting scene! (Set, of course, to Lisa Loeb’s “Stay,” because that is the only song in this entire episode.) It is very romantic.

So that is what happens in this episode, for the most part. It’s really very funny, in a super-weird way, and any self-respecting comedy fan or Doctor Who fan would not be ill-served by giving it twenty two minutes. So watch it, if you have time before Netflix implodes!

Oh, it’s not going to implode. Maybe. I think. But you should probably watch it soon, just to be sure.