So I know you saw the new Huge Ackman vehicle Real Steel last week, and though we haven’t yet been able to discuss it in detail, I’m very pleased to hear that it was 100% pure enjoyment! (Surprising no one, really, because how could a cybernetic pugilism film from the director of Date Night be anything less?)

Anyway, I’m bummed that I couldn’t join you on the trip to the ol’ robot ring, so I’m going to try to make it up here. I figure there’s only one thing that can retroactively enhance the Real Steel experience: READING ABOUT THE SOURCE MATERIAL! 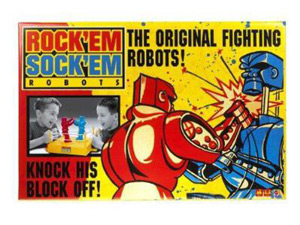 One of the many Marx toys! Have you all of them?

Liz, though I still have trouble believing it, Real Steel is not an adaptation of Rock’em Sock’em Robots. Apparently it is actually an adaptation of “Steel,” a short story by the great Richard Matheson, originally published in 1956 (eight years before Rock’em Sock’em Robots hit the shelves)! The Los Angeles Public Library system is very stingy with its back issues of The Magazine of Fantasy and Science Fiction, so I have not been able to track down the story. Fortunately, they made it into a Twilight Zone episode!

Matheson scripted the episode from his own story, so it has extra authenticity as an adaptation. (The episode actually aired one week before Matheson’s famous “Nightmare at 20,000 Feet”. Trivia!) Here’s how it goes:

A bus pulls up in the sleepy town of Maynard, KS, (accompanied by a particularly swinging West Side Story-style jazz line) and two passengers wheel out what appears to be a giant man on roller skates, sewn into a bag and wearing a luchador mask. This is already a promising start. Also one of these two passengers is Lee Marvin. (Hey! Lee Marvin!)

These two men wheel into a bar, order a couple of beers, and start lamenting the condition of their masked companion. They’ve got a big fight coming up, and the masked guy, “Maxo,” is their contender. Only Maxo is a very unusual boxer. Lee Marvin (whose name is “Steel Kelly”) and his buddy (whose name is “Pole”) talk about Maxo’s squeaks and rust spots, and the fact that he’s such an old model that replacement parts are hard to come by.

Pole’s not sure Maxo’s going to make it through the first round, but Lee Marvin won’t give up on him. “What are you always knocking him for? He’s done all right for five years! So he needs a little oil paste! He wins this fight, we’ll get him all that stuff!” Liz, just what kind of man is “Battling” Maxo?

In an uncharacteristic bit of fourth-wall breaking, the camera pans over to reveal series producer Rod Serling, who informs us that Maxo is “a robut” (he says “robut”) or to be exact “an android. Definition: ‘an automaton resembling a human being.'” See, this is the near future, 1974, when human prizefighting has been legally abolished, and so only robuts are allowed in the ring. Sounds sensible enough. Only, as Rod informs us, we’re about to learn that “no law can be passed which will abolish cruelty or desperate need — nor, for that matter, blind animal courage.” (Thematic spoiler alert!)

I checked and August 1st, 1974, was indeed a Thursday. Nice job, Art Department!

This episode is immediately very entertaining. It’s a lot of fun to listen to these fast-talking, hard-nosed ringside types talking about robot parts. And I always forget that Lee Marvin is a really good actor. He’s Maxo’s manager/owner (Pole is Maxo’s mechanic) and he stubbornly refuses to give up on Maxo’s chances in the ring, even as Maxo is obviously falling apart. (There’s a recurring bit where the wheel keeps falling off his roller skate.) “Maybe you’ve heard of Maxo?” Lee Marvin asks the fight promoter, smiling, sweating, a little desperate. “He was almost the world heavyweight champion once!” Then he adds, a little sadly, “I used to be a heavyweight myself … before the law was passed, of course.” Tragic backstory!

It turns out our heroes have fallen on particularly hard times. It’s hard to get Maxo new bouts, because he’s a creaky old B2 model. (His opponent today is a brand-new B7.) They only got this fight because the originally scheduled robot was damaged in a car accident. Lee Marvin’s used the last of their funds getting them to Kansas, and they desperately need the fight money for Maxo’s repairs. Unfortunately, they don’t get paid until after the fight.

Lee Marvin and Pole wheel Maxo into the dressing room to get him warmed up for the bout, and we finally get to see the robut without his luchador mask.

He has a creepy mannequin face. They power him up, adjust some knobs on his back, and Lee Marvin tries to engage him in a little light sparring. But when Maxo extends a punch, his arm pops (there is literally a “boi-oi-oing” Foley effect) and he blows a gasket. Bad news, Liz. Maxo’s busted but good.

The fight is minutes away, so there’s no time for replacement parts, and they couldn’t afford them anyway, and Pole’s skeptical that they even make the parts they need anymore. This is basically the saddest (and therefore best) aging boxer narrative ever. (And I say that having seen Rocky Balboa. I’m pretty sure at your apartment.)

I guess it’s finally time for Lee Marvin to throw in the towel.

Or to hatch a harebrained scheme!

Lee Marvin convinces (mostly through threats of violence) a reluctant Pole to disguise him as a robot (mostly by making him up with a creepy mannequin face). If Maxo can’t fight, Lee Marvin’s going to fight in his place. (This is crazy! It’s the Tale of Two Cities of robot boxer narratives!)

Pole wheels Lee Marvin into the ring, and Lee Marvin does a surprisingly convincing robot impression. The raucous crowd jeers and hollers at the appearance of this “old model,” unaware that a pretend robot is about to face a real robot opponent.

I should mention that earlier, during his offhand mention of his tragic backstory, Lee Marvin explained that he got the nickname “Steel” because back in his pre-dystopia human boxing days, he had a reputation for taking a lot of punches without dropping. This is relevant, because Lee Marvin now spends a full three minutes of screen time getting punched in the face by a robot.

He pretty much gets beaten to a pulp. The bell rings. The judges declare the real robot the victor after a single round of fighting. Lee Marvin’s lying in a lump on the floor of the ring, but before Pole can scoop him up, Lee Marvin hisses, “The robe! The robe!” He wants to make sure he’s covered up, so the spectators won’t realize that his apparent oil leaks are actually a whole lot of human blood.

Pole covers Lee Marvin up and wheels him out of the auditorium. All the while the crowd’s calling after them, “Throw out that scrap metal! What a pile of junk!”

Back in the dressing room, Pole tries to tend to Lee Marvin’s wounds, but Lee Marvin’s just like, “Get the money! The money!” And Pole runs off to collect from the promoter.

Then Lee Marvin’s just left alone, bleeding on the floor of the dressing room, staring up at Maxo, still frozen in his robot fighter pose. 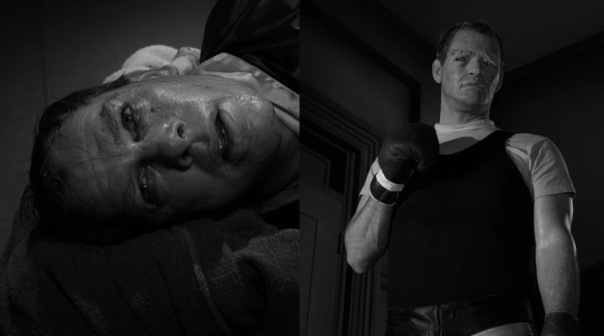 There isn’t really a final twist to this episode, except that the fight promoter only pays Pole half of what they’re owed, because a single three-minute round isn’t much of a show. But Lee Marvin’s like, “That’ll be enough. We’ll take the bus back, buy Maxo those new parts, and then he’ll be fighting again, good as new….”